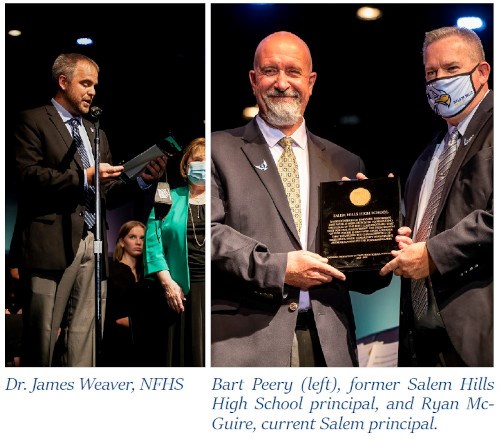 The NFHS has announced Salem Hills High School (SHHS) of Salem, Utah, as its 2021 NFHS Performing Arts School of Excellence. Salem Hills is the sixth school to receive the award, which has been presented to one high school in the United States each year since the fall of 2016.

Recipients of the NFHS Performing Arts School of Excellence are chosen for their exemplary commitment to the performing arts and are honored in October to celebrate National High School Activities Month, which serves to remind students, parents, coaches, administrators and others in communities across the country about the values and benefits of high school activity programs.

“This award is a way to recognize the great performing arts programs around the country,” Weaver said. “The award can excite programs to grow, and we can continue to highlight the importance of performing arts within high schools. Salem Hills High School has a long history of excelling at the top levels of performing arts in the state of Utah and Section 7, and we are excited to celebrate its success.”

An impressive portion of those accomplishments belong to the SHHS debate program led by Doug Welton, who has coached teams to one Utah High School Activities Association (UHSAA) Class 5A state championship, two state runners-up, 11 region championships (10 consecutive), and three straight Sundance District Sweepstakes titles (2018-19, 2019-20, 2020-21). Additionally, the program has produced three individual Lincoln-Douglas state champions and one Impromptu state champion, 23 academic all-Americans, one Sundance Student of the Year and numerous national debate competition qualifiers. Welton has received several honors of his own, including Class 4A Debate Coach of the Year and Speech Educator of the Year from the UHSAA, Sundance Administrator of the Year, and two Diamond Coach honors from the National Speech & Debate Association (NSDA). This outstanding resume has also resulted in the NSDA naming Salem Hills a Leading Chapter school for Utah.

“Ten region championships in a row speaks for itself – Mr. Welton and his students are incredible,” said McGuire. “Mr. Welton leads by example serving as a state legislator, and helping students understand the critical issues facing our world today.”

The drama program has produced impressive results under the direction of former coach Jan Hunsaker and current coach Zac Trotter, highlighted by a UHSAA State Theatre Competition Sweepstakes championship in 2018-19 and winning the Southern Utah University (SUU) Shakespeare Competition Sweepstakes in 2018. SHHS also took home first place for the Ensemble category at the SUU Shakespeare Competition in 2015 and took second place in the Tech Olympics category and third place in Ensemble Scene in 2019. They have also had success in One-Act Play at past UHSAA State Theatre Competitions and region competitions, placing second in the state and in their region in 2017-18, third in the state in 2020-21 and third in the region in 2018-19.

“Our drama department has been one of the best in the state for the past several years, but what I will always remember are the performances that I’ve attended,” Peery said. “From Peter Pan to Mama Mia, and last year’s performance of Grease and everything in between, our students have stolen the show with the amazing skills that they have learned from our great teachers.”

Choir instructor Justin Bills has guided his choirs to numerous ‘superior’ ratings at UHSAA Region Choral Festivals and Utah Music Educators Association (UMEA) Choral Festivals and has mentored dozens of students to similar honors at UHSAA State Solo & Ensemble Festivals. His choirs are also well-traveled, as they have performed at Chicago Symphony Hall and The National Cathedral in Washington, DC, and will take the stage at Carnegie Hall in New York City in March.

“The first time I heard them sing the school song Mr. Bills wrote and the rest of our student body sang it with them, it brought me to tears,” McGuire said. “I love this group and the spirit they bring to our school – amazing teacher and students.”

Paul Wells has led the SHHS orchestra on an impressive 10-year run of ‘superior’ ratings at the UMEA State Orchestra Festival and the UHSAA State Solo & Ensemble Festival, which has also included numerous ‘superior’ ratings for individual students and small ensembles. The orchestra was showcased at the Fall Workshop for the Utah Chapter of the American String Teachers Association in 2020 and 2021 and has been invited to perform at the Utah Music Educators Mid-Winter Conference, and recently crossed over the border into Colorado to achieve an Outstanding Overall Performance distinction for Class 4A at the Colorado West Invitational.

“I love the collaboration happening between the middle, junior and high school levels,” said McGuire of the orchestra. “The students and Mr. Wells have an amazing vision of growth and excellence in the program.”

The Salem Hills band has also become a force at the region and state levels, winning a marching band state championship in 2013- 14, and consistently earning ‘superior’ and ‘excellent’ ratings at the UMEA State Concert Band Festival and State Jazz Band Festival. Former SHHS band director Mike Larsen and current director Ryan Adair have sent a number of students to region and state solo and ensemble festivals and have also groomed several recipients of the Sterling Scholar award, a distinction for Utah high school seniors who pursue excellence in scholarship, leadership and citizenship.

“One of my favorite things is to watch the jazz band perform and see the individual soloists that are so talented get to show off their skills,” Peery said. “I also have attended several marching band competitions and their dedication to their craft is second to none in our school.”

The Salem Hills dance company – coordinated by Amber Johansen – has received ‘superior’ or ‘excellent’ ratings from the Utah Dance Education Organization (UDEO) or the Dance Company Festival Association (DCFA) in seven of the past eight years, headlined by a ‘superior’ rating and a Utah State Student Choreography Award from the UDEO in 2019 and three DCFA ‘superior’ ratings over a four-year stretch from 2013 to 2016.

Salem Hills also features a ballroom dance team – the only existing ballroom program among the seven high schools in the Nebo School District. In addition to their winter and spring performances where they showcase a number of ballroom dance genres, instructor Lexie Gordon and the ballroom team take much pride in their halftime performances at SHHS athletic contests, as well as representing the school in various community celebrations.

“I love watching our dancers work and then perform,” said Peery. “Their performances are always so uplifting. One of the things that I am so proud of in our dance program is how they integrate our students with disabilities into their concerts. As a parent of a child with special needs, it always touches my heart when I see these students out there enjoying the opportunity to show off their skills and their passion for dance.”

Under Becky Rosenberg and Sarah Shuler, Salem Hills’ visual arts program has flourished. Over the years, several students have been chosen to take part in the All-State High School Art Show, with two students earning Jurors Awards, which are only given to six students each year. Another student was nominated as a finalist for the Utah State Senate Art Competition, an honor reserved only for the very best high school entries in the state. Designed as a class that features concurrent college enrollment, more than 100 participating students have received college art credits over the past three years.

“The size of the program and the high-quality work being produced in our classes is impressive,” McGuire said. “This is certainly one of the most requested programs in our school for a good reason.”

While the NFHS Performing Arts School of Excellence award helps establish Salem Hills High School performing arts on the national level, the hard work and dedication poured out by SHHS teachers and students have long been recognized within the Beehive State.

“The UHSAA is thrilled to have the NFHS recognize Salem Hills High School, and the Association also congratulates Salem Hills on their continued success in the performing arts,” said UHSAA Executive Director Rob Cuff. “Salem Hills is a tremendous example of the continued focus UHSAA member schools have on creating a diverse, education-based activities experience for students. Congratulations to the Salem Hills community on this well-deserved national honor.”

The five past recipients of the NFHS Performing Arts School of Excellence award include:

Nate Perry is coordinator of media relations at the National Federation of State High School Associations.

The Baseball Rule: Liability to Spectators for Foul Ball Injuries

The Importance of Building a Brand in High School Sports Programs