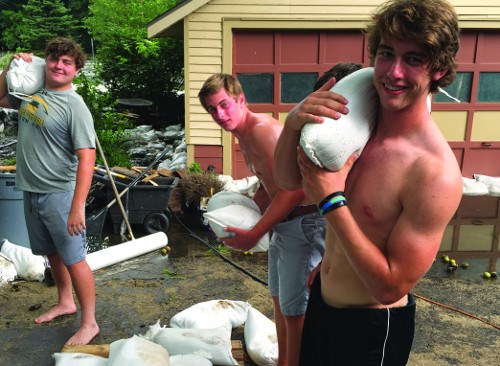 The 2016-17 school year was unforgettable for high school athletic teams in McHenry County, Illinois; however, Mother Nature followed by making it a summer to forget as relentless rain caused flooding throughout the northwest Illinois county.

Less than a month after the Gators recorded the final out in that championship game, the Fox River was reaching record flood levels due to the torrential rainfall that assaulted greater Chicagoland for much of July.

Many student-athletes in the region suddenly shifted their attention from building on their previous season’s athletic success, to building sandbag walls to protect their communities from flooding.

Johnsburg had members of its football, girls basketball, cheerleading, cross country, and track and field programs pitch-in throughout the community in flood relief efforts.

“It was awesome to see our student-athletes get out and support the community,” said Johnsburg High School Athletic Director Ted Juske. “It gives you the feeling that what educators and coaches are doing every day is translating into these student-athletes becoming well-rounded citizens. The community has done so much for Johnsburg High School over the years, and to see students willing to jump in and help, no questions asked, gives us a great sense of school pride.”

Many believe that Prairie Ridge High School’s football program is the best in Illinois entering the 2017 season, with several key starters back from last year’s undefeated Class 6A title team. Yet, head coach Chris Schremp chose to place the onus on community over championships, as he cancelled all levels of football camp in late July, instead sending his team out to fill sandbags throughout Crystal Lake, where they were joined by members of the Wolves girls volleyball program.

“This is what you do when your community is in need and the call for help goes out,” said Prairie Ridge Athletic Director Mark Gilbert. “The student-athletes need to understand that they are part of something larger than their teams, and that is their communities.”

Crystal Lake South football coach Rob Fontana wasn’t surprised to see his players spring into action when an assistant coach needed help sandbagging a relative’s home. Fontana noted that his squad was already active in the community, volunteering at events like fish fries, elementary school events and a local food pantry. Ultimately, student-athletes showed up to help barricade the home, before offering their unsolicited aid to several surrounding neighbors.

“We have been putting an emphasis on doing what’s right, being selfless and always putting the team first,” Fontana said. “As a coach, that was one of those moments that makes you really proud. We had a really tough day of mini-camp that morning, and we had a lot of guys that were physically worn out. Those were the same guys who jumped right into action and drove across town to help out. They didn’t question anything, they just wanted to help.”

Twenty-some miles to the east in Gurnee, a similar scene unfolded at Warren High School, whose O’Plaine campus sits just yards from the Des Plaines River.

While the buildings on campus were either sandbagged or sat on higher ground out of harm’s way, the looming flood of the river did pose a significant risk to the Blue Devils’ stadium and its artificial turf. A complex and labor-intensive tarping process was required to keep the small rubber pellets on the field, both for the integrity of the playing surface and the environmental safety of surrounding residents.

Warren Athletic Director Mark Pos’ tarping timetable was suddenly cut short when city officials informed him that most roadways to the school would be closed the following day. Pos reached out to his football, soccer and lacrosse coaches for any bodies they could find to help, and was amazed when more than 30 student-athletes had arrived a half hour later, with that number growing throughout the afternoon.

“This completely represents our program and kids,” said Warren head football coach Bryan McNulty. “They are the definition of servant leaders and didn’t think twice about lending a hand when the school needed it. We can go on to win many games, but this, in my opinion, was a defining moment in our program.”

Pos, who has been at Warren for more than 30 years, remarked that the flooding in the summer of 2017 was the worst of five major floods the school has experienced in his tenure. But in Gurnee, like in much of Chicagoland, the worst brought out the best.

“I didn’t know what to expect,” Pos said. “But it was amazing, kids just kept coming. It was one of my proudest moments here.”