High school students in Virginia will soon have another opportunity to showcase their talents and skills during a state championship-style event; however, unlike many of the other Virginia High School League (VHSL) competitions, this one will not be contested on a field, court or stage – it will be on the big screen at the newly established VHSL Film Festival.

The festival is the third state association-sponsored event of its kind, joining two other NFHS member associations in Texas and Iowa. The VHSL’s inaugural event will take place May 29-30, 2015, in Richmond.

“It is what we need to be able to give young filmmakers the opportunity to have their work seen in front of an audience, which is a remarkable thing,” said Mary Nelson, deputy director of the Virginia Film Office. “It gives them a goal to work towards. If there is something to work for, something special to achieve, boy, that is a remarkable thing. It makes all the difference in the world.”

Nelson added that the Virginia Film Office is committed to supporting educational initiatives that bring workers into the film industry. After having worked with universities in Virginia, she is pleased to have a high school level component in place. “That is the start – that is where it all begins.” 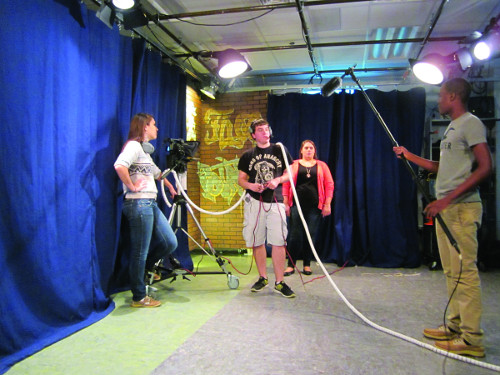 Allen Weintraut, the media advisor at Annandale (Virginia) High School, says his students are excited about the opportunity the event provides for them, not just for the venue to show their work but also to see what other students have done.

“The students crave seeing other student films more so than they do professional films,” he said. “They are not just interested in competing with other students, but learning from them as well.”

This new event affords high school students from the 314 VHSL member schools another avenue to prepare and compete for a state championship, or in this case earn a Best Picture Award. Lisa Giles, VHSL assistant director for activities, said as of this past April, there were 56 schools that have film programs.

“There are so many educational components to completing a film,” Giles said. “There are so many bases covered. Video editing and storytelling are part of the Virginia standards of learning that our schools have to abide by. When you have a program like this, it hits all those things – it hits English, technology, video production and editing.”

She added that submissions are not limited to just students from schools with film programs. Any student from a VHSL member school can enter the contest, but he or she must have some adult oversight ensuring that the student meets deadlines and the proper forms are filled out, as well as to provide guidance and direction.

“What Iowa has found is that some schools have these talented kids who are doing this all the time anyway on their own,” Giles said. “Their schools may not have a film program, but they have talented kids who can edit video and have creative ideas.”

Students will have the option of creating a film in one of five categories established by the VHSL and which are typically offered at industry festivals. Narrative, documentary, animation, experimental and commercial/PSA emerged as the top five.

“The committee looked at what industry festivals offer, and narrative and documentaries were the most popular,” Giles said. “Even though the commercial/PSA category is not strong at industry festivals, we thought it would be strong in our market for high school students.”

Once a category is selected, the student(s), either in a solo venture or as part of a team, will create the film from concept to final edits. Some areas involved are writing, editing, directing, acting and filming.
Film length requirements vary, with the commercial/PSA submissions being an industry standard 30 or 60 seconds, and films from the other four categories lasting a minimum three minutes to a maximum of eight.

Each school can submit one film per category, totaling five films. Once the films are submitted they will be categorically reviewed by preliminary jurors who will rank the content with eight films from each category emerging as Official Selections. This process will be conducted online and after the April 1, 2015 submission deadline.

Films that are designated as Official Selections will then be viewed by category during the two-day film festival. During the view sessions, grand jury judges will critique and evaluate each film to determine what film will earn Best Picture honors.

Giles said during the preliminary selection process and the film festival viewing, the carefully selected jurors will have specific rubric-type criteria to use for judging the films and will vary from category-to-category. However, the jury is not the only determination of a winner. Those viewing the films will have the opportunity to cast a vote for one of the eight films, with the top vote-getter being named the Audience Choice winners.

“The runner-up is considered the Audience Choice,” Giles said. “That is pretty industry standard, too. When you go to an industry film festival there is a best award, and then a lot of times they will award an audience choice.”

Nelson said that entertainment content production is an industry that is growing world-wide.

The film festival is not just about viewing and ranking films, but will also provide an educational opportunity for the attending students. Prior to each category view segment, an industry professional from the particular category will provide a 45-minute educational session based on the category.

Then following the eight films in each category, the student directors of the films will sit for a Q & A session with the audience.

“We definitely did not want to ignore the educational piece,” Giles said. “We are hoping that schools that are not represented by films in the Official Selections will come for (the educational opportunity). We feel that will make for stronger programs.”

Jason Haddix is coordinator of sports at the NFHS after serving internships in the Publications/Communications Department. He is a 2013 graduate of Indiana University-Purdue University Indianapolis where he earned a bachelor’s degree in medical imaging and a certificate in journalism.