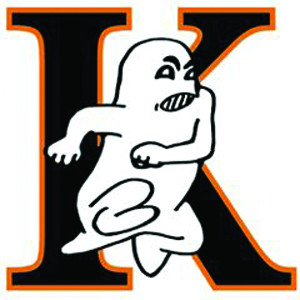 The origin of the Kaukauna (Wisconsin) High School Galloping Ghosts dates to the 1920s. However, there are two different theories on how the school got its nickname.

The first origin claims a local sportswriter referred to the Kaukauna football team as “ghosts” in an article. The writer had predicted a Kaukauna win over the Appleton Terrors based on the fact that Kaukauna was lighter and would trample Appleton with speed. This game was played on Halloween and Kaukauna was dressed all in white – looking like a large group of ghosts.

The other theory involves legendary footballer Red Grange, who was nicknamed The Galloping Ghost. In 1924, Kaukauna Coach Bill Smith was so impressed with Grange, he called his small but quick group of running backs “galloping ghosts,” which stuck as a name for the school’s other teams.

The legend of the Galloping Ghosts was cemented around 1940 when a student cloaked himself and his horse in bed sheets and ran onto the football field to deliver the game ball to officials.