Two Bands in One: Playing Another Instrument Provides New Perspective 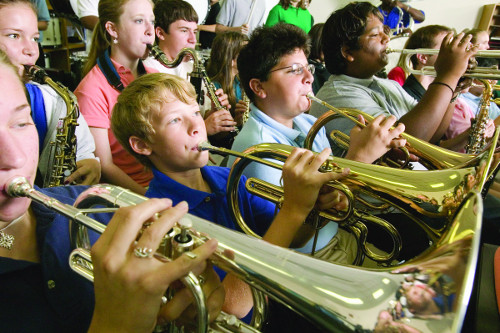 The complaints came from the front row to the back, year after year, with each instrument section complaining about the skills, abilities and contributions of any and all others. The flutes thought the trumpet section didn’t understand or follow dynamics at all. The clarinets noted that the flutes were always out of tune. The saxes wondered why the low brass players tired too easily. Everyone complained that the percussion section did not seem to know how to count – when it had the easiest instruments to play.

Suggestions that playing another instrument was harder than one thought and that different strengths and talents were needed by performers of all kinds to make the band function never seemed to placate anyone nor reduce the number of verbal assumptions. So, our school embarked on a year-long project in an effort to end the complaints forever.

During September and October, a representative of each section spoke to the entire band about the history, performance challenges and musical value of their instrument. Earning credit toward their grade along with being selected as the one person to speak for their colleagues made finding volunteers very easy. After information was shared from each section of the band, students were asked to find a partner on a different instrument from their own to work with on this effort. Those decisions were finalized by early October and very few needed the director’s help to find a musical mate.

Through an effort to find unused instruments in our community (mostly donated by parents who still had their instruments from high school), along with borrowing some instruments from other schools, we were able to provide a second instrument for every student. We used money from our budget for additional reeds, mouthpieces and cleaning supplies, and provided a set of beginning lesson books from our elementary school.

Each pair of students started instructing their partner on their respective instruments in October, and each “lesson” earned both students grade credits once they completed a short form on what was undertaken and what was accomplished. Band rehearsals continued on their primary instruments, with short weekly demonstrations by each section to reinforce what good tone quality and technique sounds like.

By January, students were fine-tuning their teaching and asking for additional materials, so we added duet books to the collection of music available for students to use in instructing their partner. Also, some of the lessons became larger with a whole group of “new” musicians working together on their tone, fingerings and technique. The fact that all of these students could already read music allowed them to focus on how to create a sound with their new instruments and how to improve their technique so that they could be more accurate rhythmically and melodically.

The group began discussing what type of music it wanted to play in its “second” band arrangement. A balance between band literature, pop pieces written for band and a classical piece was sought and the music (borrowed from the middle school library) was secured so that in March, a portion of the rehearsal schedule was devoted to the second band instrumentation.

By the final concert in June, the band members were ready and the concert began with a prepared program on their primary instruments. A short intermission followed as the students returned to the band room, warmed up their second instrument and headed back on stage to perform the second band program. While the second performance did not match the quality of the first part of the program, it was well-received by the audience and was a proud moment for the students.

This effort ended the complaints. Students provided verbal and visual support for others in the group, even when it was apparent that one section was being challenged by the music. Offers of help, encouraging words and friendly joking became the norm and spilled over into the students’ classroom work and other ensembles. The “Two Bands in One” experiment was so successful that it was repeated once every four years so that every student had that experience once during their high school career.

The unexpected benefit came from the support it generated in the community. During the very first rehearsal of the second band, the group was videotaped (without its knowledge). That video was played for the audience during the intermission between the two groups’ performance in June; and while its initial intent was simply to fill that time, it provided the parents with an idea of how far they had come (non-musicians often figure that if a musician can play one instrument, they can play them all). Once the parents saw that video, support for home practice, better instruments, more performance opportunities, and all fundraising became the norm. In addition, younger siblings realized that maybe they could be a musician as well.

Steffen Parker, a member of the High School Today Publications Committee, is a music educator, computer geek and instructional support specialist from Vermont where he organizes music festivals, and supports other states with online services for their events.