Thanks to the Miracle in Monticello, a Life is Saved 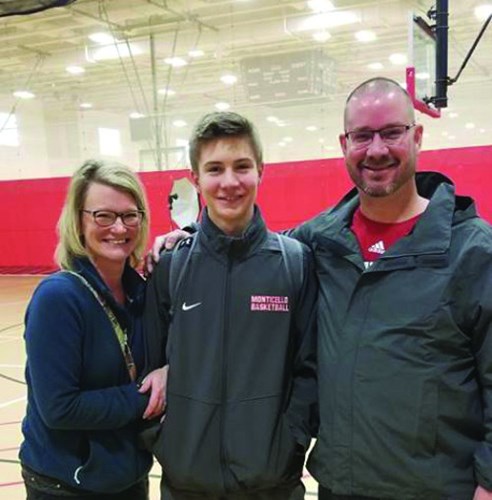 A miracle, performed by angels, took place recently at Monticello (Minnesota) High School. Those words – “miracle” and “angels” – were spoken by the mother of a young man whose life was saved on a basketball court.

It was the second day of boys basketball practice for the 2017-18 season, with workouts/tryouts held before and after school. On the Tuesday before Thanksgiving, practice began at 6 a.m. Fifteen-year-old sophomore Ryan Monahan was involved in the first drill of the day when he fell to the court.

The reaction was swift. Head coach Jason Schmidt, knowing that several coaches from other sports were working out in the nearby fitness center, hollered for them to come to the gym. He removed the nearest AED (automated external defibrillator) from a fieldhouse wall and handed it to head football coach Jason Telecky. Assistant boys basketball coach Bruce Balder-Lanoue was kneeling over Ryan when Telecky arrived with the AED.

“We were very fortunate that we had multiple staff members in the weight room working out,” said athletic director Gary Revenig. “One of the football assistants, our head girls basketball coach, our assistant principal; they all kind of took on a role.”

Schmidt had seen Ryan slowly collapse to the floor, falling on his midsection and face; he thought maybe Ryan hadn’t eaten or was dehydrated. “We rolled him over and knew immediately that it was serious,” Schmidt said. Ryan was somewhat conscious but “clearly out of it.”

Boys B squad basketball coach Nate Rengel called 911. Varsity assistant coach Cory Puppe started clearing the other players away, moving them behind a curtain that separates courts in the large fieldhouse.

One of Ryan’s friends had the number for his mother, Cindy Monahan, in his phone, and Schmidt called her. Cindy’s initial reaction upon learning that her son had collapsed centered on his busy schedule. Monday had been hectic, with basketball before school, basketball after school and a band concert in the evening.

“He was in the right place,” she said. “If he had been with his friends, at a movie or something …” Her voice trailed off at the thought of what might have been.

Two staff members went outside to wait for the ambulance and guide the first responders into the fieldhouse. Balder-Lanoue and Telecky attached the AED pads to Ryan’s chest. Once the device is connected to a victim, it analyzes the heart rhythm and instructs the responders in what to do. When it told them to push a button that delivers a shock to the heart, Balder-Lanoue and Telecky looked at each other and realized, "We’re doing this.”

Within seconds, Ryan was back. He was confused, trying to figure out what happened, but he was fully conscious. The ambulance took him to St. Cloud Hospital, home of CentraCare Heart & Vascular Center.

“I knew what happened but I didn’t know they had shocked me when I first woke up,” said Ryan, who had no previous medical issues. “It was pretty scary.”

Cindy drove to the hospital, not waiting for her husband, John, to get dressed; but John moved quickly and wasn’t far behind her on the highway.

“It was absolutely mind-boggling,” Cindy said. “I don’t remember a lot. I remember getting in my car and getting to the hospital.”

She was relieved when she saw her oldest child.

Ryan was released from the hospital the next day, and doctors do not know what caused his heart to malfunction. He will undergo genetic testing and see specialists as they try to pinpoint the issue. In the meantime, he is not allowed to play basketball or do anything physical, although Schmidt told him he is more than welcome to be with the team at any time in any other role he wants to fill.

The Minnesota State High School League (MSHSL) requires that all coaches fulfill Coaches Education Requirements (CER), including AED training. All the Monticello coaches in the building that day had done so. A few days earlier, Revenig had reminded Balder-Lanoue that he needed to complete the AED training or he would not be allowed to coach. Balder-Lanoue did so on Sunday.

“He told me Tuesday that because of the CER, everything was fresh in his mind,” Revenig said. “All that saved this young man’s life.”

Schools are encouraged to discuss and practice Emergency Action Plans, and in some cases individual teams will do the same. The Monticello staff members had done so, and everyone jumped into action.

“When you put this plan together, you know you can’t do everything yourself,” Schmidt said. “Fortunately, we had all those people there. No one in the gym had used an AED in the past. We had done our training, and probably like everyone else you assume you’re never going to have to use it. And then you do.”

He added, “You do the training and maybe you kind of do it with a halfhearted mentality, thinking, ‘When will I have to do this?’ You get educated, and then it happens. Right now you could ask my captains, ‘How many AEDs are in the building?’ Before this they knew where two of them were but now they know where all of them are. What’s the plan if a referee goes down? We’ve talked about these things.”

The first responders and doctors at St. Cloud Hospital said the same thing: Ryan is alive because of the people who were prepared for such an emergency.

AEDs and emergency training are not required for high school coaches in all states. The Monahans are very thankful for the work the MSHSL has done in these areas and how their school administrators and coaches have embraced it.

“John’s brother-in-law in Colorado is a baseball coach and he’s never been trained on it,” Cindy said. “We want to get the word out. Ryan is a success story of why schools have these.”

Schmidt, who has also talked to friends who coach in other states, said, “What I’m coming to learn from talking to people is that this (AED training and use) isn’t even on their radar. That blows my mind. How can we start getting this on everyone’s radar? How in this world of technology are people not aware of this?”

Ryan collapsed on the last day of school before Thanksgiving break. His parents brought him to school after classes ended the following Monday so he could see his friends and his parents could thank everyone for saving their son’s life.

Cindy and John hugged all the staff members who helped out. John noticed the spot where the AED had hung for years and said, “I’ve walked past that thing a thousand times and I always thought it was for old people.”

The next day, John issued a series of Twitter messages thanking those who rescued Ryan. One of them read: “If your child plays sports, make sure your coaches know where the nearest AED is and they know how to use it. My son is alive today because our school was prepared and we had fine men on watch at that time.”

Thanksgiving was very special for the Monahans this year.

One more thing: The nickname of the Monticello High School teams? They’re the Magic.

John Millea is the media specialist for the Minnesota State High School League.