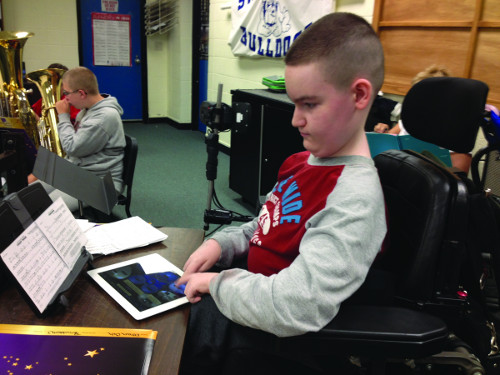 He was going to quit, but she wouldn’t take “no” for an answer. When percussionist Ethan Och, a junior at Swanville (Minnesota) High School, decided to hang up his drumsticks a few years ago because spinal muscular atrophy (SMA) was making it increasingly hard to keep up with the rest of the concert band, his teacher had other ideas. Teacher and band director Gina Christopherson instead turned to technology to find a solution that allowed Och, who uses a power wheelchair, to keep playing.

“Ethan came to me and told me he was going to have to quit because he just couldn’t drum any longer,” Christopherson said. “He said, ‘It’s OK because I have this app on my phone’ and showed me this piano app that he’d found.

Christopherson used her own phone to find more music-based apps and after some trial and error, she and Och narrowed the list of potential apps from about 75 to six. Of those six, Och rotates between two, Cowbell Plus and Garage Band, and occasionally uses a few more on his iPad, which is hooked up to an amplifier. With these apps, he has been able to play the bass drum, snare drum and cymbals.

“It’s allowed him so much more freedom because with SMA, he has to have help with everything that he does. From the moment he wakes up in the morning until he goes to bed, everything requires assistance, except here in the band room,” Christopherson said. “Here, the only thing he requires is that somebody plug his iPad in, flip the switch on the Block Rocker [amp] and put out his music once in a while. He absolutely loves the independence.”

Another obstacle they faced was how to make Och’s new instrument mobile so he could perform with the marching band. For that, they switch to an iPhone, which can be strapped to his leg (“VELCRO® is our best friend,” Christopherson said.) and some creative power on the go.

“When we originally started this process, we took a car battery and a power inverter, put them in the bottom of a baby stroller, plugged in a guitar amp, plugged the phone into that and had someone walking beside him pushing the amp,” Christopherson said. “Now, the Block Rocker’s got an onboard battery so we don’t need the car battery anymore. We just pop it into the baby stroller and off we go.”

Christopherson said with the few accommodations they made to help Och participate in marching band, his learning curve has remained relatively the same as other students’.

“He doesn’t require a lot of accommodations. It works well and he’s able to maneuver and learn to turn corners like everybody else just by using a frontward and backward motion. So, he steers with one hand while drumming with the other,” she said. “It was even his first official ‘sport.’ It gave him so much independence and he was so excited about it.”

Och found that his iPad also allowed him to participate in speech activities, something he did during his first two years of high school.

This month, the Swanville band will be traveling to New York to perform and do some sightseeing at places like Carnegie Music Hall and the Metropolitan Museum of Art. Thanks to a successful GoFundMe campaign, Ethan will be making the trip with his band.

“I’m proud of him for sticking with it even when we were trying to fuddle our way through the very beginning,” Christopherson said. “When we started, we were using a stereo and he felt so bad every time we’d blow a speaker. So, the fact that he’s really stuck with it and the fact that our student body has stood beside him – my students in concert band with him are completely baffled as to why everyone’s making such a big deal about this.”

The attention that Och’s story has generated has led to more students across the country getting to participate in their bands. Christopherson said she has three more students at Swanville who are playing alternative instruments. Even some extra resources, including a new iPad that Och didn’t need, have been sent to students in other states.

“[Ethan’s story] just kind of took on a life of its own,” Christopherson said. “Ethan’s goal in telling his story was just that other kids get to do that. He was so proud of that.”

Christopherson’s advice for both students and directors alike is to never stop trying and ask for help whenever they get stuck.

“My advice to the student is to keep pushing and to the directors is to reach out and ask for help,” Christopherson said. “There are electronic wind instruments and a lot of different accommodations that can be made that just allow you to play differently than everybody else.

“Don’t take ‘no’ for an answer. There’s got to be a way to figure out how they can participate.”