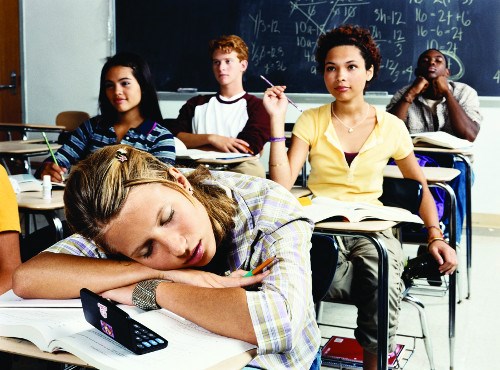 Alarm clock. Wake-up. Eat. Train. School. Eat. More school. Practice. Eat. Homework. Sleep. Repeat. This is the day for millions of high school athletes, but what happens when something else needs to fit into an already full day? The answer for many is less sleep to cram in more commitments. Unfortunately, the unintended consequence of sacrificing sleep may be decreased athletic performance.

Many athletes eat, sleep, breathe and live for their sport. Student-athletes have the added complexity of attempting to balance academics, athletics and social time. Most athletes understand that physical conditioning and good nutrition significantly affect athletic performance, but sleep is often an undervalued aspect of optimal athletic performance. The National Sleep Foundation recommends that teens get 8-10 hours of sleep per night1. Most teens, athletes included, do not get enough sleep. Lack of sleep can impair performance in the classroom and on the field by not giving the brain and body adequate time to recover.

What happens during sleep is still a mystery, yet the medical community does agree that what happens during sleep is vital to our physical, mental and emotional well-being. Sleep is a very active state of cell growth and repair. Sleep is made up of two states: non-REM (rapid eye movement) sleep, which is broken up into four stages, and rapid eye movement (REM) sleep.

The first stage of non-REM sleep is a light, transitional sleep. The second stage accounts for about 50 percent of sleep and is important for many cognitive and body functions such as regulating hormones that control growth, healing, biological rhythms, hunger and stress. Stages three and four of non-REM sleep are crucial for cell building and repair. Stage three triggers more release of growth hormone, which contributes to growth in children and boosts muscle mass.

The second sleep state, REM sleep, makes up about 20 percent of sleep and is characterized by lack of muscle tone and high brain activity; dreams are common in this stage of sleep. REM sleep, in particular, provides energy to both the brain and body through increased protein production. Simply put, if sleep is cut short the body does not have adequate time to repair damaged cells, release hormones important in growth and recovery or store memories of new skills learned.

Sleep deprivation is the condition of not getting enough sleep. In a review article published in “Sleep Medicine Reviews,” a large number of studies observed a decrease in athletic performance after sleep deprivation. Many of these studies focused on endurance performance, making it likely that not only physical but also psychological effects, such as motivation, contributed to the adverse effect of sleep
deprivation on athletic performance. Conversely, a study in the “Journal of Physiology and Behavior” demonstrated that increases in sleep duration, or the amount of time spent asleep, by approximately two hours a night for one week showed significant benefits in accuracy and performance of varsity tennis players’ serves, suggesting the central importance of sleep on preparing the body for optimal performance.

Lastly, getting enough sleep is important for appetite, energy expenditure and weight control. Studies have suggested that during sleep the body’s production of leptin – an appetite suppressor – increases, and grehlin – an appetite stimulant – decreases. People who sleep less are more likely to be overweight. Getting enough sleep is part of a healthy lifestyle choice for weight control.

To ensure that student-athletes are performing at their best, athletes, parents and coaches all need to recognize the close relationship between sleep and performance. Practicing good sleep habits, referred to as sleep hygiene, can help athletes get a good night’s sleep and perform at their best. Practicing good sleep hygiene includes:
• Sticking to a sleep schedule by going to bed and getting up at the same time each day – even on weekends.
• Practicing a relaxing bedtime ritual.
• Exercising daily.
• Avoiding bright lights (such as electronics) and the pixelated screens of electronics.
• Avoiding big meals close to bedtime.
• Avoiding caffeine, especially in the late afternoon and evening.
• Sleeping on a comfortable mattress and pillow.
• Additional aides include some mobile apps that can calculate when to fall asleep and when to wake up. These apps consider and average 15 minutes until falling asleep and avoidance of awakening in the middle of a sleep cycle.

There has been some discussion about the use of the supplement Melatonin for sleep. Our body naturally produces Melatonin. It cues the brain and body that it is time for sleep by causing drowsiness. Production of Melatonin builds during the early evening and the first two hours of sleep, but our body stops releasing the hormone later in the night. The supplement is usually for short-term uses related to jet lag; however, the effectiveness is controversial and long-term use remains unclear.

Non-REM Stage 2
Accounts for about 50 percent of sleep. Important for cognitive and body functions that regulate hormones that control growth, healing, biological rhythms, hunger and stress.

Non-REM Stage 4
Very deep sleep makes up about 15 percent of sleep. Processes occur that are crucial for cell building and repair.

REM Sleep
About 20 percent of sleep, characterized by lack of muscle tone and high brain activity, which is crucial to good memory; dreams are common. Provides energy to both the brain and body through increased protein production.