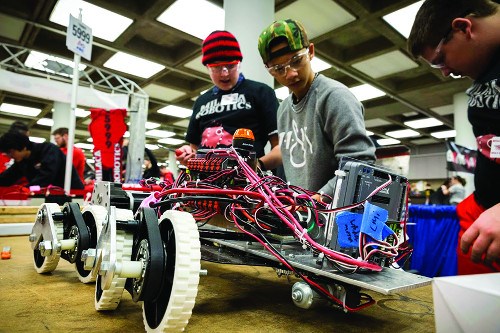 In 2008, the Minnesota State High School League (MSHSL) thought it would have no issue scheduling the University of Minnesota’s Williams Arena for its upcoming state basketball tournament. Surprisingly, MSHSL staff learned that a robotics competition was already scheduled at the 18,000-plus-seat facility.

Out of curiosity, MSHSL Executive Director David Stead attended that year’s regional competition hosted by FIRST (For Inspiration and Recognition of Science and Technology) and discovered it brought an unmatched amount of drama and fanfare.

“It caught us a little off guard because it’s a basketball arena and we had been ousted,” said Amy Doherty, MSHSL Program Specialist. Following a year of research, the MSHSL announced its collaboration with Minnesota FIRST to offer robotics as an education-based activity, making it the first program of its kind in the nation. The fifth-annual MSHSL FIRST Robotics State Championship took place this past May with more than 200 teams and 700 students participating.

Robotics is just one of several emerging sports and activities at the high school level the past few years. Increased interest has also been indicated in recent years in archery, badminton, flag football, girls wrestling, and adapted and Unified sports as a way for students to get involved with their school beyond the traditional sports arena.

Dean Kamen, an entrepreneur and inventor, re-invented the wheel when he founded FIRST in 1989. He discovered a disinterest from students to obtain mathematics and science affiliated jobs after he visited a robotics design class at the Massachusetts Institute of Technology (MIT).

When Kamen began conceptualizing FIRST, he wanted to develop an activity that could generate the type of support that is rivaled by that of athletics and fine arts. “Kamen wanted to create something that would change the cultures in the communities by celebrating hard work in math and sciences, doing it so in the same way that we celebrate hard work in fine arts and athletics,” said Ray Almgren, FIRST in Texas Foundation Chair. 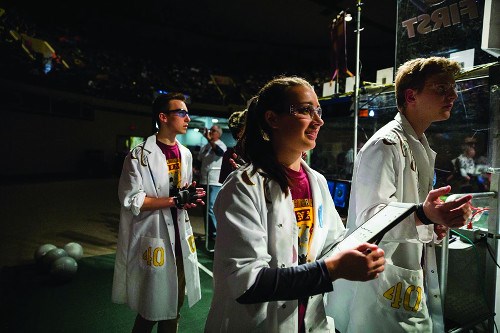 “When the buzzer sounds, it’s a two-minute match where you will see robots drive around and try to accomplish an objective during autonomous mode. Each time they reach that objective, they receive points,” Almgren said. “After that 30-second autonomous mode, there’s what we call a TeleOp mode in which a team driver directs his/her robot all over the field with a remote control, trying to pick up balls, shoot them, block them or whatever is required by the challenge.”

When time concludes, competitors enter a bonus round to capture what could result in significantly more points. In one such instance, robots were required to scale the castle wall in the race toward victory.

“The drama from a spectator point of view is pretty significant with that format,” Almgren said. “You don’t know who’s going to win, and it may go down to the wire every time.”

“We had a vision in mind for some new directions that we wanted to go with our academic program, looking to implement more competitions that are collaborative, project-based, and that engage students’ creativity,” said David Trussell, UIL Director of STEM Activities. “Robotics really checked all of those boxes for us.”

In the fall of 2015, the UIL launched its robotics program in cooperation with FIRST in Texas. Using the already-in-place FIRST season as its basis, the inaugural UIL Robotics pilot program culminated in July 2016 with the first-ever state championship.

“There’s no amount of fundraising that I could’ve done that is more impactful in giving access to robotics than partnering with the UIL,” Almgren said. “When Dean started FIRST, he wanted to change the culture. If you live in Texas, the only way that you can change the culture in high schools is by doing it through the UIL. It is our culture.”

According to Almgren, an estimated 19,000 students have been impacted by FIRST since it partnered with the UIL. Trussell reported that last year’s state championship had more than 80 teams. Schools can field multiple FTC teams with as many as 10 students, while only a single FRC team can represent a school with an average of 25 students per team. 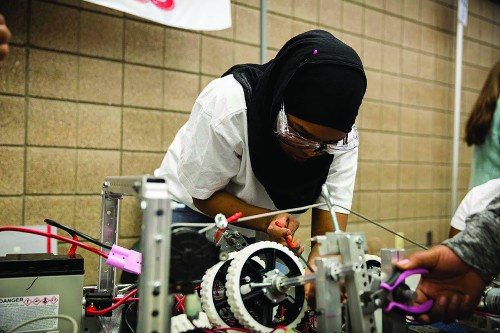 “I think one of the neat things that we’re seeing is teams participating in robotics who haven’t participated in any other UIL activity,” Trussell said. “We’re bringing in new opportunities and different groups of students who haven’t necessarily been involved in the past. Another really positive aspect is the teamwork and collaboration you see, not only within teams, but with teams helping other teams out.”

Depending upon the level of engineering, costs for FIRST can exceed those for BEST, Trussell said. FTC team start-up costs are approximately $1,500 and FRC start-up costs are approximately $8,500. However, fundraising and corporate sponsorships within school district parameters can help offset these fees. BEST attempts to minimize those costs in offering robotics kits to teams upon registering for the program. Teams receive a returnables kit with parts such as remote controls and motors, in addition to their consumables kit equipped with PVC pipe, plywood, paper clips and similar items.

BEST has an average team size of 19-20 students at schools nationwide, Ackerman said. Schools are permitted one team, with no member limit. Operating during the fall semester, BEST hosts a kickoff event that allows teams to receive their challenge, view the playing field, receive kits and see a demonstration of how the challenge unfolds. Six weeks after the kickoff, teams return for competition during qualifying events.

About 130 teams were involved in the inaugural UIL Robotics: BEST Division, which included the five-part BEST Award and goes beyond simply the competition.

“They focus on not only the competitive aspect but professionalism, cooperation and sportsmanship,” Trussell said. Robotics has given the UIL two unique academic opportunities that met multiple needs and came with a fall and spring season, according to Trussell.

“We wanted to have an approach that would provide our schools a range of options to look at,” Trussell said. “We’re a big state with more than 1,400-member high schools with a huge spectrum of circumstances and needs so we wanted to provide options that would be a fit for as many of those schools as possible.”