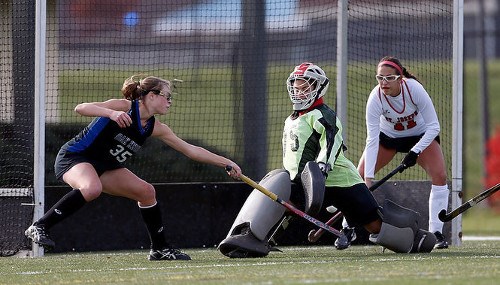 A new substitution rule for goalkeepers has been adopted in high school field hockey. Effective with the 2017 season, all players, including the goalkeeper, will now enter the game through the 10-yard substitution area.

This revision in Rule 1-2-4h was one of eight rules changes recommended by the National Federation of State High School Associations (NFHS) Field Hockey Rules Committee at its January 12-13 in Indianapolis. The proposed rules changes were subsequently approved by the NFHS Board of Directors.

Beginning next season, all substitutions, including ones involving the goalkeeper, will take place from the same substitution area. The game and time will only be stopped for a goalkeeper substitution at a natural break in the game, which is defined as any stoppage that does not interrupt the flow of the game.

Mark Koski, NFHS director of sports, events and development and liaison to the NFHS Field Hockey Rules Committee, said the new procedure will allow for a smoother and safer transition during a goalkeeper substitution.

Rough and dangerous play and unnecessary delay of game are now considered fouls rather than misconduct and are included in the list of fouls in Rule 8-1.  Umpires can now use all administrative tools to manage such fouls as they occur in the game. On deliberate fouls by the defense within the 25-yard line, but outside the circle, the official shall award a penalty corner.

The awarding of a penalty stroke for misconduct in Rule 8-2 has been eliminated. The committee believes that removing a player for the remainder of the game and the team playing short-handed are appropriate consequences without awarding a penalty stroke to the opponent.

In the Official Field Hockey Signals, separate signals will be developed for “Free Hit” and “25-Yard Free Hit.” Previously, they were combined in one signal.

A complete listing of all rules changes will be available soon on the NFHS website at www.nfhs.org. Click on “Activities & Sports” at the top of the home page, and select “Field Hockey.”

Bryce Woodall is an intern in the publications/communications department at the NFHS. He is a senior at Franklin (Indiana) College, studying public relations.