One of the new trends on the high school sports scene is the increase in student-athletes who are playing two sports in the same season. Typically, these athletes are playing one sanctioned school sport, while at the same time playing a club or travel-league sport.

For example, some student-athletes who play high school football during the fall might also play baseball on the weekends, or continue to compete in weekend golf tournaments.

Thirty years ago, there was typically one predominant sport participation model when it came to versatile student athletes – the three-sport letter winner. In these cases, student-athletes competed in different sports in the fall, winter and spring season. 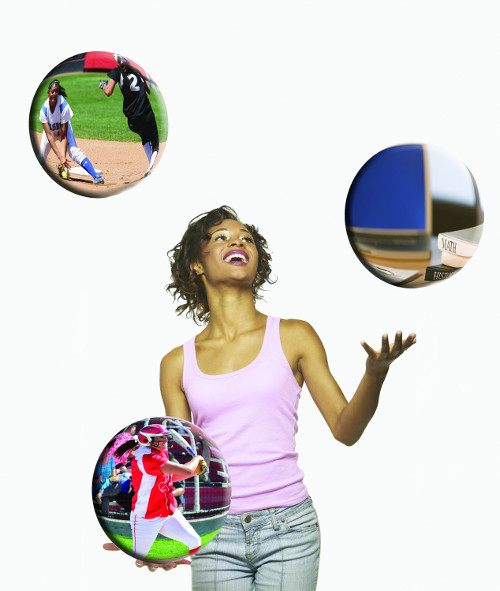 In the 1990s, a new student-athlete prototype emerged – the “sport specialist.” In these cases, the individual chooses to compete in just one sport, often playing that sport year-round. Today, both the three-sport letter winner and the sport specialist are still commonly found in schools across America; however, the two-sport, same-season student-athlete appears to be picking up momentum – for better or worse.

Student-athletes who choose to compete in two sports at the same time have to quickly learn and develop countless life skills, including time management, multi-tasking and discipline, and they sometimes need academic and emotional help. Student-athletes who are able to successfully balance their sports along with all their other interests and responsibilities stand the greatest chance of benefiting from this type of sport experience. Some two-sport, same-season athletes, however, are at risk for sports burnout, high stress and problems related to academics and other responsibilities.

There are several factors that have contributed to the new, two-sport student-athlete, including the following:

• Student-athlete interest – with more opportunities to play sports, some student-athletes are embracing these opportunities.
• Similar to the previous point, increasingly more sports leagues, showcases, camps and clinics are now available, making it much easier to find ways to play sports seven days a week.
• Parents unaware of issues and complications relating to greater sports intensity, including sports burnout and increased risk for physical injuries. Without this awareness, some parents might be at risk for encouraging kids to play a second sport in the same season.
• Some parents may falsely believe that the odds of their child earning a full-ride athletic scholarship dramatically increase by playing a second sport during the same season, but this has not been supported through research.

The reality is that student-athletes – like the rest of us – only have 24 hours in a day and already have most of that schedule filled with “fixed variables” like school and sleep. Can student-athletes successfully juggle their increased sport responsibilities while at the same time keeping the grades up? And what about the other social experiences and school activities that may need to be shelved in order to have the time needed to devote to sports? These questions will likely be answered in the years ahead.

Coaches, athletic directors and parents involved with student-athletes interested in playing two sports at the same time should consider the following questions when examining this decision:

• Is the student-athlete mature and responsible enough to handle this increased level of commitment? Keep in mind only being able to play part-time in both sports might actually lead to bigger problems, especially with respect to playing time fairness and team dynamics.
• Does the student-athlete fully understand the complications and consequences that might be involved with this decision, especially as it applies to other potential missed opportunities and potential struggles to keep up with studies?
• Are the parents of the student-athlete cognizant of the harsh realities of the limited number of “full-ride” athletic scholarships – even when kids play more sports?
• Is the student-athlete aware of the increased chances for physical injuries and sports burnout because of playing more than one sport at the same time?

Playing one sport per season can be a challenging enough proposition for most student-athletes, so they must be made aware of the challenges of this new, two-sports, same-season prototype that is emerging.

Dr. Chris Stankovich is the founder of Advanced Human Performance Systems and an expert in sport performance science and athletic counseling. Additional information is available at www.drstankovich.com.