After years of using outside initiatives, the New Mexico Activities Association (NMAA) decided it was time to bring sportsmanship back home. This fall, it introduced the “Compete with Class” initiative to help promote and reward good sportsmanship throughout the state.

“The one thing that makes it stand out is it is homegrown – it’s all from New Mexico administrators and coaches, and it is totally education-based,” said Dusty Young, associate director of the NMAA. “We really felt that if we put something together that came from our membership, athletic directors, coaches and even our student-athletes, we’d have more buy-in to the program.”

Beginning last year, a committee of NMAA staff, retired and current administrators and coaches met to define sportsmanship and create a program to share the importance of its core values – respect, integrity and responsibility – in athletics and activities.

Sportsmanship fundamentals, as defined in the initiative, include knowing and following the rules, acknowledging good play by both teams and respecting others – from opponents and coaches to players and spectators. Students are encouraged to represent themselves, as well as their families, schools and communities, with positivity and take full accountability for their actions that do not reflect the core values. 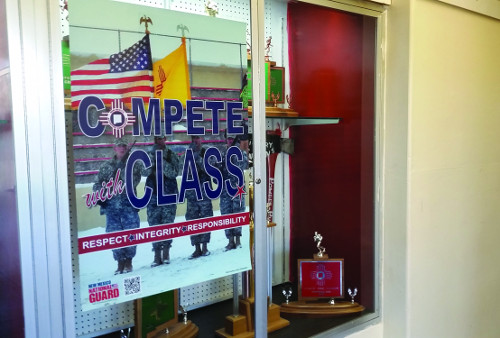 The “Compete with Class” slogan was partially created by students in a contest to provide suggestions for the program. The three schools that provided the best suggestions were each awarded $1,000. The common theme of the contest entries was “class” or “be classy,” so the NMAA combined that with something it encounters on a daily basis – competition.

“Competing with class is really what we’re supposed to do,” Young said. “Competition is good, but it’s really only good if you’re doing it the right way.”

The committee also settled on the idea that everyone participating in athletics or activities, from the coaches and officials to the students and even the fans, should remember to “stay in their lane.”

The committee’s work so far has resulted in a curriculum and set of resource materials the NMAA uses when presenting to schools and communities about sportsmanship. Athletic directors and coaches can use the materials to promote the program within their own schools as well. Each school is provided with any number of promotional materials, from banners and posters that can be hung around the school to t-shirts and lanyards for coaches and administrators to wear. There is also a “Compete with Class” DVD and public-service announcements for use during athletic events.

“As we put this program together, we felt the only way to get buy-in was to make sure the ‘Compete with Class’ slogan and values were branded across our member schools,” Young said. “So that not only our administrators and coaches know about it, but our student-athletes and even the general student population know that ‘Compete with Class’ is something that’s important to high school athletics and activities.”

Although the program is still in the beginning stages, the NMAA has been soliciting stories of teams showing good sportsmanship from schools across the state and has already been getting seven or eight tips a week from athletic directors and coaches. These stories get tweeted out and posted on the official NMAA Facebook page, which currently features the “Compete with Class” slogan in its banner image. The organization hopes to choose a winner every week and ultimately pick monthly and seasonal winners. It also anticipates local schools and districts putting their own “Compete with Class” recognition programs together to highlight acts of sportsmanship at a different level.

Continuing a practice that has been a mainstay with the NMAA Foundation, the “Compete with Class” program will also offer four scholarships that will be awarded at the state basketball tournament in March. Young said these scholarships will be given to students who have done the right things throughout their high school careers and have exhibited strong character.

“It’s one of the biggest awards for the sportsmanship initiative,” Young said. “There are only four of them, so the four kids that get those are really going to encompass the ‘Compete with Class’ motto.”

The NMAA wants to make sure the “Compete with Class” program is recognizable and that people are aware of it and are getting involved. Ultimately, the NMAA would like sportsmanship to simply become an automatic response for everyone participating in an event. 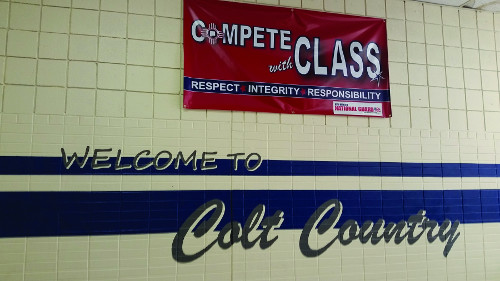 “One thing we want to cross their minds after a bad call or when they’re shaking hands after the game is to compete with class,” said Tyler Dunkel, NMAA’s sports information director. “We want that to be imbedded in their minds. It really starts at the top with us, starts with this office, and trickles down.”

So for now, the major focus is on making sure the NMAA has created a solid foundation that will last a long time and become a homegrown tradition within New Mexico schools and communities.
“Really, it’s just maintaining it and trying to develop it and grow it throughout the school year,” Young said. “We’ve gone through several different sportsmanship initiatives just in the past few years, so we really want this to catch on and use it for years and years.

“Twenty years from now, we hope ‘Compete with Class’ is the initiative that we started here this year.”