For more than 25 years, the Kansas State High School Activities Association (KSHSAA) has been focused on not only sportsmanship, but leadership and citizenship also.

“We’ve really chosen, when it comes to sportsmanship and citizenship, to be very proactive and not reactive,” said Reggie Romine, KSHSAA assistant executive director, at a recent NFHS Summer Meeting workshop. “It’s the center of everything we do. 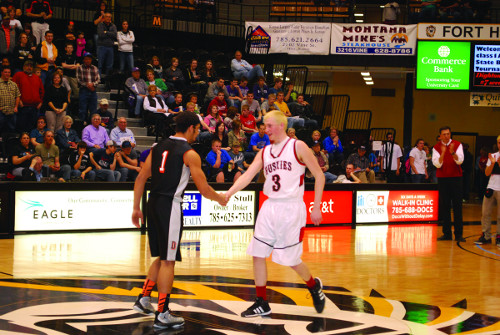 “We are the only game in town that truly provides education-based athletics and activities. It is because of our programs that kids stay in school, graduate and hopefully develop citizenship skills for life.”

To help distribute the message of good sportsmanship, the KSHSAA has developed brochures that feature the “sportsmanship high five.” These lists of five reminders are catered toward different segments of the school population, such as administration, coaches, participants and fans, and provide helpful hints for displaying good sportsmanship.

The hints remind players and coaches to both win and lose with grace, and fans to encourage their own team instead of attacking the opponent.

These brochures also stress KSHSAA’s Rule 52, which is listed in full in the association’s 32-page Sportsmanship/Citizenship Manual and further encourages students to display courtesy, knowledge of the rules, respect for the opponent and self-control.

The KSHSAA also provides free sportsmanship banners to current and new schools to display in their gyms and remind fans and participants alike that they “make the difference.”

“We encourage our schools to put [the brochures] in the entrances to the auditoriums and around bulletin boards for their student bodies,” Romine said. “The banner is very simple, but it gets the message across.”

In addition to promotional materials, the KSHSAA also provides prerecorded PSAs that schools can play before game announcements. The PSAs are read by 12 junior- and senior-level boys and girls who make up the KSHSAA student leadership team.

“It’s in their own words. We ask them to write three, 30-second PSAs,” Romine said. “I think it’s just a great way to get a double out of a single hit and it comes from our students.”

The KSHSAA student leadership team also gets to design the logos for each state championship throughout the year, including the state basketball championships, where awards for sportsmanship are determined and handed out.

Eight volunteer judges, mostly retired athletic directors, coaches and officials, judge each school based on the actions of its cheerleaders, fans, players and coaches, everything from respect of the national anthem to alternating pep band performances.

Schools that make it to the quarterfinals are awarded sportsmanship certificates, while schools that advance to the semifinals and finals compete for sportsmanship plaques and medals, which are presented to the cheerleaders.

“You’ll go around and see those schools displaying their certificates,” Romine said. “Sportsmanship is important. If we get more people working on it, we can make a difference.”