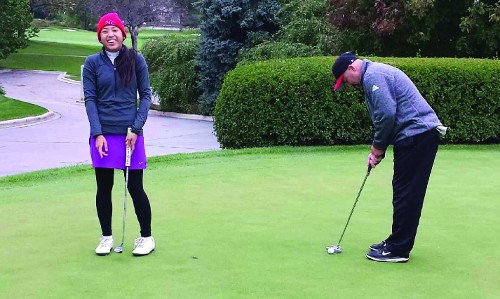 Then third-year Athletic Director Dan Jones didn’t take credit for the record-breaking year, as Hinsdale Central has been historically strong in many of its programs, but he also didn’t rest on his laurels when it came to motivating, communicating and connecting with his coaches and student-athletes.

That is why Jones made the decision to get a different perspective during the 2015-16 school year. 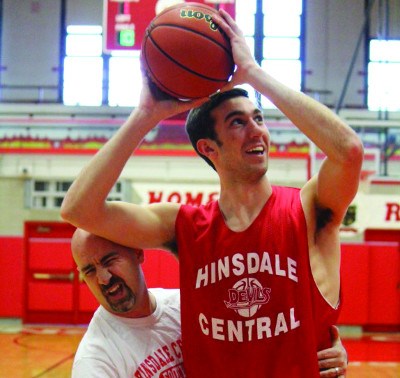 “I decided I would participate in a practice with every one of our varsity programs,” Jones said. “I was at a point personally where I was trying to get back in shape, and professionally I wanted to have more contact with our student-athletes. I saw it as a chance to kill two birds with one stone.”

After gaining approval from his principal, Jones sat down with his coaches and laid out his plan. It came with two important caveats.

“My first reaction when I heard Dan was going to take this on was that there was no way he’d be able to fit us all in, especially while still juggling all of his other regular duties,” McCabe said.

McCabe was partly right. Conflicts with scheduling made Jones decide to practice with all of the fall and winter sports teams in 2015-16, while he will complete the practice tour with the spring sports teams beginning in February 2017.

Scheduling aside, McCabe believes that the school’s spring sports teams are in for a positive experience when Jones suits up with those squads in the coming months.

“The experience for my girls cross country team was great,” McCabe said. “I think I speak for our team and all of our other athletes when I say that doing this not only made Dan more visible to the athletes, but let them see him on a personal level and get to know him in a smaller setting – all great things. It’s the typical ‘outside-the-box’ thinking that makes Dan such a unique, likeable and effective leader.”

While it is outside-the-box thinking, Jones won’t claim to be the inventor of the exercise, as he said he got the spark to try it after reading about a high school athletic director in Michigan who had practiced with multiple school teams.

It’s a strategy that isn’t just limited to athletics inside of schools. Last February, Education Week highlighted a national initiative called the “Shadow a Student Challenge” that encouraged school leaders to spend a day with students and share their experiences.

Susie Wise, the K-12 lab network director for Stanford’s d.school, which helped organize the Shadow a Student Challenge event, told Education Week about some of the goals of the challenge.

“What’s most important is what might you see and how will that connect with the questions you have about your school,” said Wise to Education Week. “Whether you are a struggling student or a star student or someone in between, the experience of being noticed and having someone with authority show that they care is actually really powerful and validating.”

“Everything that happened since then has been positive,” Jones said. “All my coaches were in favor of it and enjoyed it. Students who were underclassmen last year will see me in the halls and ask me when I am coming back to practice. There is a lot to be said about learning this way, but the most important part was the connections I made with my coaches and the student-athletes.” 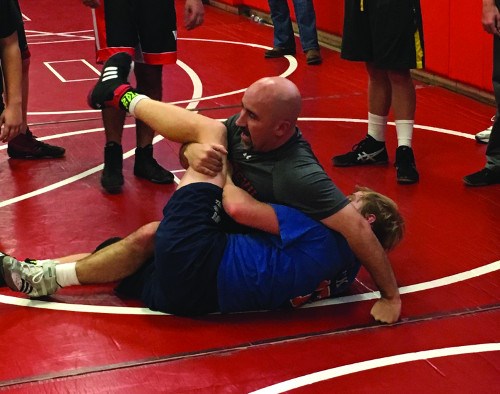 The idea was such a success that Hinsdale Central principal William Walsh decided to follow suit this November, when he shadowed a senior student-athlete in high-level AP/Honor classes. As a result, he has plans to do so again.

“The experience was awesome,” Walsh said. “To see students engaged in higher order questioning of one another with respect and critical thinking was empowering. As I reflect on my experience, I look forward to this experience again, but from the perspective of a General Education student. While the AP/Honor perspective was enjoyable, I wonder how Hinsdale Central meets the needs of a General Education student.”

To be fair, Jones’ shadowing experience was a little more physically exerting than that of his principal. The 50-year-old has been an athletic director for 12 years, but was a sprinter on the track and field team, and played football and wrestled during his own high school career.

On the whole, he felt like he kept up pretty well throughout the practices, noting that he hadn’t played much tennis in his life and wasn’t a great swimmer.

Asked about the toughest moment, he doesn’t hesitate to bring up his practice with the boys basketball team, where the “high tempo” had him “turning red,” requiring head coach Nick Latorre to make his super-duper senior sit down and take a breather.

Conditioning aside, Latorre, who got a double dose of Jones as the head girls golf coach, felt like his athletic director accomplished his mission.

“Having Dan come to practice was a very positive experience for both myself, as well as the team,” Latorre said. “I think it is great for our kids to have an administrator show an interest in their team in a very positive manner. It also has helped Dan develop a strong bond with all of our teams and have a different perspective on the relationships players have with each other as well as their coaches.”

Jones recalled plenty of highlights, from yoga and a penalty kick competition with the boys soccer team, to a lost short-range game with the girls golf team that resulted in push-ups, to running five miles with the cross country team. He even got to practice alongside his daughter, a student-athlete in gymnastics and cheerleading.

“I was really impressed with how our kids compete constantly,” Jones said. “There is so much competition within practice and they thrive off it. In a girls volleyball practice, we were doing a serve-receive
competition and when I messed up, the girls wouldn’t get mad, they would try and pick me up. But it was clear they wanted me to focus because they wanted to win.”

But the biggest win for Jones remains in the interactions he had with the students.

“The conversations were my favorite parts,” Jones said. “Between drills or grabbing a drink during a break, kids talked to me about my job, or my high school career, or about their coaches, or their goals or whatever. A lot of those relationships have carried over to this school year. It will help me moving forward to better make decisions that are student-centered.” 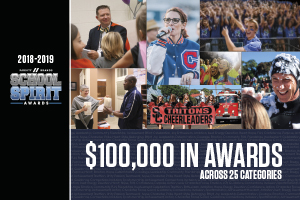