Ice Hockey: The Official's Role in a Safer Game 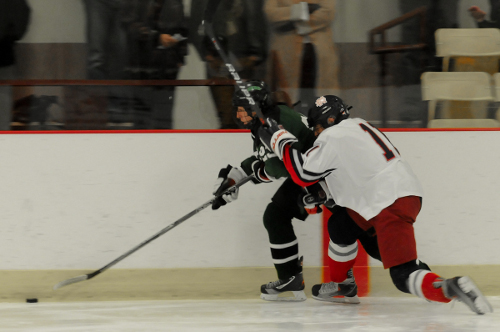 In the past couple of years, there has been a change in how the majority of the ice hockey community views rough and violent play that can cause injuries.

Historically, coaches coached and players played. The belief was that hockey is a game where you hit the opponent as hard and as often as you could in order to achieve a perceived advantage in the play or cause the team’s better players to have to leave the game with an injury.

If those hits were within the playing rules, no problem. If they were within the acceptable standards for the interpretation of the rules, all the better. If it went beyond that, it was just considered part of the game, even if an injury did occur.

But times have changed in ice hockey.

While hard hits are still an integral part of the game, there is now an emphasis at all levels of hockey, from the National Hockey League down through the youth, toward eliminating those hits which have the most potential of being a dangerous injury. Last May, the NFHS joined in, adopting stiffer penalties for boarding and checking from behind.

Standards for these types of hits formerly deemed acceptable are no longer tolerated.

The driving factor for changing these standards has been the enhancement of the penalties assessed.  With the enhancement of the penalties follows a change in coaching strategy and playing techniques. Without the lead taken by writing stiffer rules and enhancing the penalties for a violation of those rules, however, I don’t believe that this change in coaching strategy or playing techniques would have gained much acceptance in the hockey community.

As the standards for coaching and playing a safer game of hockey have evolved, so has the need for officials to make the proper calls to support these rules.

While it was once acceptable to look the other way or minimize the penalty in a “no harm, no foul,’’ kind of way, officials working high school hockey games today must be ever alert to properly penalize those infractions which do carry a potential for causing injury in order to reduce these infractions from occurring in the first place.

When the penalty becomes severe enough, and the penalized player’s team suffers more than a minor inconvenience of playing short-handed for two minutes, players and coaches will adapt and a safer game will result. This safer game emphasizes speed, skill and finesse, and is thought by many to be a much more enjoyable game to play and to watch as a spectator.

This has been seen in Minnesota high school hockey the past three years after the NFHS granted the Minnesota State High School League the opportunity to experiment with tougher penalties for major infractions. I would expect to see high school hockey become a safer environment in the 17 states that govern the sport now that tougher penalties have been adopted by the NFHS.

Checking from behind and boarding – considered to be the two most dangerous plays in hockey – are now five-minute major penalties. Previously, they were minor penalties.

There is no place now, if there ever was one, for officials to minimize injury-potential infractions based on the comments or influence of any particular coach.

Bill Kronschnabel is the head rules clinician and supervisor of state tournament officials for the Minnesota State High School League. He served 12 years on the National Federation of Ice Hockey rules committee.

What you Need to Know About COVID-19 to Protect Yourself and Your Fa.

Planning Ahead for Return to Sports, Other Activities