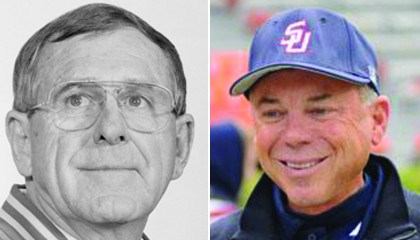 Having crafted individual legacies that are certain to stand the test of time, National High School Hall of Fame inductees and high school football legends John McKissick and Pat Sullivan passed away this past week.

A discussion of “the greatest of all time” within a sports-related topic typically sparks spirited comparisons and rarely culminates in a consensus. A conversation regarding the greatest high school football coach of all time, however, definitely includes McKissick.

McKissick, who passed away on Thanksgiving Day, was the head coach of Summerville (South Carolina) High School for an amazing 63 seasons (1952-2014) and finished his career as the winningest football coach at any level with a record of 621-156-13 and a .795 winning percentage. Forty-one of those victories came consecutively from 1978 to 1980.

Also included on his resume are 10 SCHSL state championships, three national high school coach of the year awards, a U.S. patent for the cloth helmet covers used to distinguish offensive and defensive players at practices and inductions into the South Carolina Hall of Fame in 1982 and the National High School Hall of Fame in 1990. McKissick, who remained at the helm for the Green Wave for an additional 24 seasons after his national hall of fame induction, was awarded the “Order of the Palmetto” – the highest civic honor for South Carolina residents – in 1986 and saw the field at Summerville’s Memorial Stadium named after him in 1987.

"It's a tremendous loss not only for the Summerville community, but the Lowcountry and the state of South Carolina," former Stratford (South Carolina) High School coach Ray Stackley told The Post and Courier. "For guys like me, who coached against him for a lot of years, we became fierce competitors with him, but also tremendous friends. He and I have had a special friendship for a long, long time. It's going to be hard to imagine the Lowcountry and Summerville football without John McKissick."

Prior to becoming a three-year starter at quarterback and the 1971 Heisman Trophy winner at Auburn University, Sullivan was the best high school football player in the state of Alabama during his junior and senior seasons at John Carroll Catholic High School in Birmingham.

Sullivan, who passed on December 1, was a two-time all-state selection and All-American by Scholastic Magazine, was named National Catholic High School Player of the Year as a senior and was voted the greatest player in the history of Alabama high school football – by a large margin – in a 2013 poll issued by AL.com.

While he is heralded for his gridiron accomplishments, Sullivan also made his mark on the basketball court and baseball field at John Carroll. He was a two-time all-state recipient in basketball, averaging 18 points per game as the team’s point guard, and earned two more as the shortstop on the baseball team.

After becoming the first player from the state of Alabama to raise the Heisman Trophy and leading the Tigers to a 26-7 record over three seasons, Sullivan launched a seven-year National Football League career that included stints with three different teams.

Sullivan began his collegiate coaching career in 1986 when he joined the staff at his alma mater as quarterbacks coach. After stops as an assistant coach at UAB and head coach at Texas Christian University, Sullivan capped his career with eight seasons as head coach at Samford University before retiring in 2014.

“Pat Sullivan was one of Alabama’s greatest ambassadors for what is honorable and good about education-based athletics,” said Steve Savarese, executive director of the Alabama High School Athletic Association. “We offer our prayers and condolences to the Sullivan family.”