Georgia Sportsmanship Program Gets a Little Help from its Friends 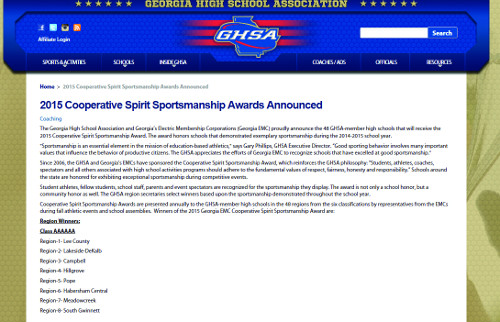 Sportsmanship is a group effort. A whole team or school promoting good sportsmanship is more likely to achieve its goal than a single person trying to do the same. The Georgia High School Association (GHSA) wasn’t even looking for a sportsmanship ally 15 years ago, but found a good one in the Georgia Electric Membership Corporation (EMC).

In 1999, the GHSA got a little help in the sportsmanship department in the form of a corporate partnership with EMC. Carror Wright, GHSA associate director, said EMC had already been supporting basketball playoff games and state track meets by providing refreshments to coaches and athletes, and wanted to expand its role.

“They wanted to know what more they could do,” Wright said. “Dr. Ralph Swearngin [former GHSA executive director] came up with the idea of letting each region elect a sportsmanship winner every year.”

The winner, Wright said, exemplifies the best sportsmanship in every sport and is voted on at the region meeting. There are eight regions in six classifications in Georgia, so 48 schools are recognized by

EMC each fall for their sportsmanship during the previous year.

“They go to the school during an assembly or a ball game and present the school with the sportsmanship trophy and award,” Wright said. “This is a big thing – it’s how we promote sportsmanship here in Georgia.”

The GHSA’s relationship with EMC has continued to evolve. The corporation sets up a booth at state events and hands out t-shirts promoting sportsmanship.

Wright said schools are also reminded of sportsmanship before every contest as the GHSA sportsmanship statement is read over the public-address system. He said he has seen a drop in derogatory events in the 15 years the sportsmanship award has been given.

“We have a decline in ejections during the athletic contests,” Wright said. “It’s increased the relationship among schools within the regions. It has brought regions closer together.”

As entire communities work together to earn the sportsmanship award every year, Wright said the teamwork is incredible.

“Schools, coaches, administrators, the band, the student body – everybody gets involved in it,” Wright said. “It’s a total team effort by each school to promote sportsmanship.

“Everybody’s been getting along a little better.”