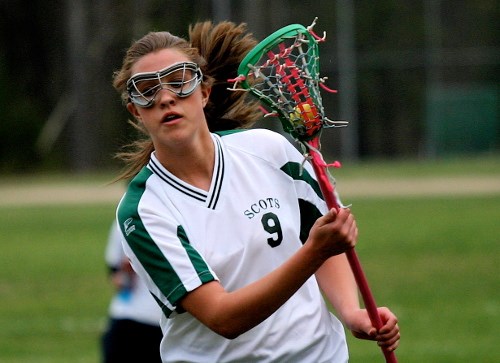 Allowing players to freely move around the playing field after a whistle is one of 12 changes to high school girls lacrosse rules approved for the 2020 season.

All rules changes recommended by the joint National Federation of State High School Associations (NFHS) and US Lacrosse (USL) Girls Lacrosse Rules Committee at its June 17-19 meeting in Indianapolis were subsequently approved by the NFHS and USL Boards of Directors.

“The committee addressed topics ranging from equipment requirements to the philosophical change to free movement with intention and extraordinary attention to detail,” said Lindsey Atkinson, NFHS director of sports/communications associate and liaison to the Girls Lacrosse Rules Committee. “The commitment of the joint NFHS/USL committee to do what is best for high school girls lacrosse was evident in both the content of their discussion and the outcomes of their hard work.”

The change to free movement impacts several areas of the NFHS/USL Rules Book. Rules 5-1-2 and 5-1-3 have been adjusted to eliminate the requirement for players to stand in place after an official’s whistle.

Free movement allows players to freely move around the playing field, instead of being required to hold their positions on stoppages including possession time-outs (Rule 4-3-3), injury time-outs (Rule 4-2-3), major and minor fouls (Rule 5-3-1), when the ball goes out of bounds (Rule 6-3-1) and free position or alternating-possession restarts (Rule 10-1).

“This will be an exciting rule change for the high school game, one which we believe will enhance the athlete experience on the field and ease the workload on officials to monitor players off the ball,” said Caitlin Kelley, US Lacrosse women’s lacrosse director and the USL liaison to the Girls Lacrosse Rules Committee. “The rules committee prioritizes safety, integrity of the game, pace of play and growth. We want our student-athletes to love the game and attract new players to the sport too.”

Additionally, in Rule 4-3-3, players may now be substituted for during a possession time-out, except for the player being awarded the ball and the offender.

Rule 5-4-4 has been amended to allow self-starts on boundary restarts. On boundary restarts, opponents must give the player in possession of the ball at least two meters — an additional meter from the previous requirement (Rule 6-3-1b).

When a stoppage in play causes the ball to become dead that was in the critical scoring area, Rules 4-3-3, 5-1-3, 5-3-1 and 7-3 PENALTY now indicate play will resume on the closet dot.

“The impact of free movement on the rules is complex,” Atkinson said. “The committee was diligent in addressing each impacted rule to ensure a comprehensive implementation of the concept into the high school game.”

Self-starting when self-start is not an option is now considered a major foul in Rule 10-1 under false starts. Additionally, under major fouls, a check to the neck is now included under check to the head with a mandatory card assessed.

Changes to Rules 2-2-5 and 2-4-3 amend crosse and stick requirements. A crosse now meets specifications if the ball moves freely in the front of the pocket, removing the requirement for the back of the pocket. Additionally, during stick checks, game officials will ensure that the ball rolls out of the back of the pocket when placed in the upper third of the head at its widest point and the stick and head are tilted 90 degrees.

“The committee felt that it was important to separate the performance requirements of the front and back face of the head during stick checks,” Atkinson said. “This change simply distinguishes the differences in performance and clarifies the stick check process.”

In a change to Rule 2-7-4, equipment cannot be modified from its original manufactured state and it must be worn in the manner the manufacturer intended.

Rule 2-7-2 now requires that all eyewear worn on the playing field bear the SEI (Safety Equipment Institute) mark for certification by January 1, 2025. Eyewear must still be SEI certified for the 2020 season; the requirement for a physical mark on the eyewear does not take effect until 2025. All approved eyewear is listed on the SEI website at www.seinet.org.

“SEI certification and the ASTM standard remain the same and an important part of maintaining safety for our student-athletes,” Kelley said. “The rules committee extended the requirement of the physical markings on the eyewear in order to minimize unnecessary cost to the consumers.”

A change to Rule 6-3-2 clarifies that a player’s body or crosse that is inbounds and nearest to the ball determines possession of the ball when play resumes.

In a tweak to Rule 9-1, the description of the minor foul, covering, is now described as covering a ground ball, instead of guarding. Additionally, preventing an opponent from playing the ball by covering the ball with the body now constitutes a minor foul. Previously, using a foot or crosse to guard a ground ball was a minor field foul.

Rule 2-8-4 now prohibits the use of video replay to review an official’s decision, consistent with other NFHS rules.

The final rules change adjusts Rule 10-1 regarding the free position after a major foul. The free position will now be taken on the 12-meter fan closest to the spot of the foul.

A complete listing of the girls lacrosse rules changes will be available on the NFHS website at www.nfhs.org. Click on “Activities & Sports” at the top of the home page and select “Lacrosse-Girls.”

According to the 2017-18 NFHS High School Athletics Participation Survey, there are 96,904 girls participating in lacrosse at 2,781 high schools across the country.

Luke Modrovsky is a 2019 summer intern in the NFHS Publications/Communications Department. He is a senior sports management and communication studies student at Wilkes University in Wilkes-Barre, Pennsylvania.