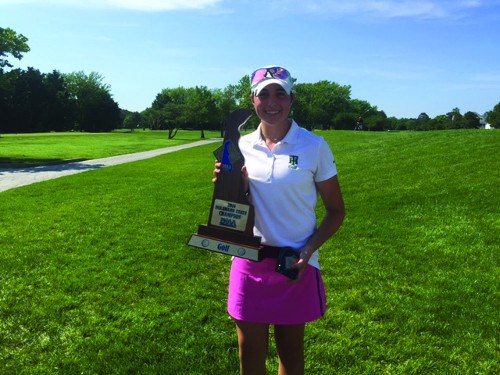 In 2003, Suzy Whaley made history by becoming the first woman to qualify for a PGA Tour event by winning the 2002 Connecticut PGA section championship. Thirteen years later, an eighth-grader similarly made history by becoming the first female to win the Delaware Interscholastic Athletic Association (DIAA) State High School Coed Golf Championship. That eighth-grader’s name is Phoebe Brinker, and she happens to be Whaley’s niece.

Brinker learned the sport from her aunt and uncle when she was just six years old and attributes most of her knowledge of the sport to them. Many would say after watching Brinker play that she was simply born to play the sport of golf.

The goal for Delaware’s coed tournament was to have females and males compete in the same event but have the girls play the yardage at 85 percent of the boys’ length. The length was not an issue, however, for Brinker as she was averaging 245-250 yards with the driver. Even with her undeniable talents, some spectators questioned just how much the tee lengths came into play.

“There were some people who were saying how the tees were moved up. And, I mean for me, it definitely was an advantage, but I still played really well. So I feel like even if I was back, I still would’ve been in contention,” Brinker said.

Throughout the tournament, Brinker consistently hit her tee shots right down the middle – winning by six strokes – to become the first female champion in the 43-year history of the DIAA Golf Tournament. With a 4-under-par 140 total, the 14-year-old completed rounds of 69 and 71 – six strokes ahead of the second-place golfer.

“I just kept the ball in the fairway, hit almost every green and made a lot of putts,” Brinker said.

But even with all that success, there was one hole that Brinker keeps in mind to fuel her continued growth.

“The 16th hole on the last day, where I made a three-putt bogey – that’s the one hole I could have improved on. I did miss a couple of putts, but you can’t really expect every single one to go in,” she said.

The humble yet confident eighth-grader wasn’t sure what to expect when she entered a tournament full of high-schoolers, but the support that she received throughout the tournament was something she will never forget.

“It feels really cool to have everyone super proud of me and all that I accomplished,” Brinker said. “I was competing in another tournament after state and a girl who was playing watched me for a couple holes and it was just really cool to experience that. You feel like you’re inspiring other people to play.”

Brinker hopes that her achievement will inspire other girls to become involved in golf, and not let the older, stronger boys intimidate them. And at a young age, Brinker is already breaking those barriers on the fairways – and with the experience she’s had throughout the summer at national and international junior golf tournaments, her best is yet to come.

“I just try my hardest because I practice hard,” Brinker said. “And most of the time, it pays off.”

Maddie Koss, a 2016 summer intern in the NFHS Publications/Communications Department, is a senior sports media major at Butler University.