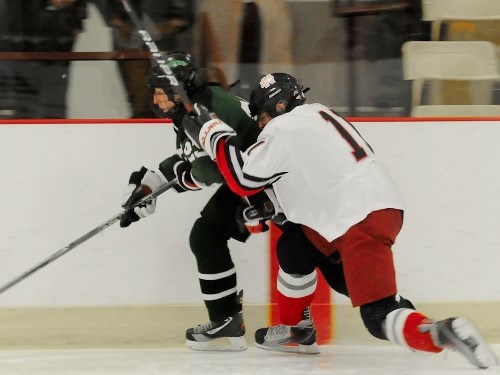 In continuing efforts to minimize the risk of injury and spread concussion awareness in high school ice hockey, specific definitions for direct contact and indirect contact to the head, along with specific penalties for each, have been added to provide clarity.

These revisions and seven other rules changes were recommended by the National Federation of State High School Associations (NFHS) Ice Hockey Rules Committee at its April 25-26 meeting in Indianapolis. All 2016-17 ice hockey rules changes were subsequently approved by the NFHS Board of Directors.

In its ongoing attempt to minimize the risk of injury in the sport, the Ice Hockey Rules Committee added two new articles to Rule 7-6 to clarify between direct contact and indirect contact to the head. Previously, the rule stated: “No player shall make contact from any direction with an opposing player’s head or neck area in any manner, including, but not limited to, with the shoulder, stick, elbow, etc.”

“The change is consistent with the committee’s goal to spread awareness of head injury and concussions,” said Dan Schuster, NFHS director of educational services and liaison to the Ice Hockey Rules Committee. “This change appropriately penalizes players for hits to the head. This will certainly provide clarity for officials, but it will also be a positive for high school hockey and help create a safe playing environment for participants.”

Language regarding penalty shots in Rule 4-7-3 was revised to include language to address the designation of a replacement player due to injury. The revised rule states if the fouled player is injured, the shot may be taken by any player of the non-offending side who is on the ice when play is stopped.

In addition, a new article was added to Rule 4-6 regarding major penalties and suspensions. The current wording only refers to players, when the intent of the disqualification penalty is to have the same consequence apply for all participants. The new addition states: “All provisions of Rule 4-6, including the major penalty and suspension, shall apply for a game disqualification assessed to a coach or other team personnel.”

In order to create consistency regarding the penalty structure within Rule 2-3, the committee added a penalty to both Article 1 and Article 2 to create a consequence for noncompliance regarding players in uniform.

Addressing warm-ups, previously players were allowed to skate the entire ice surface until a team assumed its own end. The rules committee removed that language from Rule 9-10-3 and replaced it with “each team shall proceed to its end of the ice and continue activity to its own end of the rink for the duration of the warm-up.” This change was made to avoid unnecessary interaction between teams during the warm-up.

Language regarding participant conduct in Rule 6-1-6 was added to reinforce the zero tolerance policy for insensitive language. The rules committee added that no gender slurs shall be used by players, coaches or other team personnel.

Previously, Article 5 of Rule 9-1 described the location of where players and sticks should be during a faceoff. Now it states: “Excluding goalkeepers, players shall take a stationary position on all faceoffs before the puck is dropped,” which will help clarify the process of a faceoff and eliminate motion prior to faceoffs.

“Motion prior to the faceoff can certainly serve as an advantage for a team. This rule change will eliminate the advantage and level the playing field for faceoffs,” Schuster said.

The final rules change addresses when a puck is grasped by hand and play is stopped. The rules committee moved 9-1-8j to 9-1-11j to make this infraction consistent with similar infractions, such as high-sticking and hand passes. The resulting faceoff will now take place in the defending zone of the offending team, not the nearest faceoff spot.

A complete listing of the ice hockey rules changes will be available on the NFHS website at www.nfhs.org. Click on “Activities & Sports” at the top of the home page, and select “Ice Hockey.”

According to the 2014-15 NFHS High School Athletics Participation Survey, there are 35,875 boys participating in ice hockey in 1,603 schools across the country, and 9,418 girls playing the sport in 615 schools.

Maddie Koss is a 2016 summer intern in the NFHS Publications/Communications Department. She is a senior sports media major at Butler University.