Michael Devereaux was born in Casper, Wyoming, where he was an exceptional three-sport student-athlete at Kelly Walsh High School. His record-setting performances led to him being a part of four Wyoming High School Activities Association (WHSAA) state championship teams – track and field (1981), football (1980) and basketball (1980 and 1981).

At the 1981 WHSAA State Track and Field Championships, Devereaux won the 100, 200, 400 and high jump while setting records in all four events. This feat has not been duplicated in the past 33 years by any Wyoming student-athlete.

As skilled as he was at these sports, Devereaux was an even better baseball player. Due to the WHSAA not sanctioning baseball, he played American Legion baseball and led his team to three consecutive state titles and was named the Most Valuable Player of the 1981 State American Legion Tournament.

In July, Devereaux was inducted into the National High School Hall of Fame. 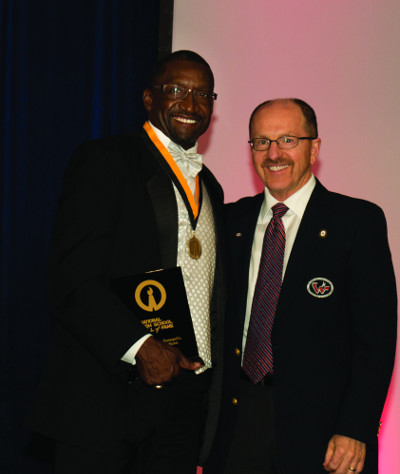 Q: You played multiple sports while at Kelly Walsh. Describe your high school experience as a student-athlete.

Devereaux: It was one of the better times of my life. I had great teachers who helped me. My mother and father also played a big part in my achievements and stressed athletics were family oriented. I played sports the entire time I was in high school – I never had down time. Basketball went into track and that overlapped with baseball and baseball overlapped with football, then back to basketball again. As long as I can remember, I played sports and my entire family was involved in athletics. I loved it – I loved running and just enjoyed sports.

Q: During your three years at Kelly Walsh you set track and field records and won state championships in multiple sports. What was your greatest accomplishment during your high school years?

Devereaux: In 1980, my junior year playing in the basketball state tournament at the University of Wyoming and we were playing against the powerhouse Cheyenne East High School, who was supposed to win it all. We had a good tournament and the finals came down to the wire and we ended up winning. That was one of the biggest crowds I had played in front of and it was exciting hearing the fans roaring, along with the atmosphere there and the fact that we really weren’t supposed to win. That was the start of a winning streak. We did not lose during my senior year.
Track was probably my most enjoyable sport because it was an individual event. You are outside and get to interact with athletes from all over the state. My best friend, Allen Griffin, and I competed against each other regularly; I won – he took second.

Q: Was baseball always the sport you wanted to pursue professionally?

Devereaux: Yes it was. Probably because it was family oriented, not just my parents, but the parents of my teammates were always in the stands rooting for us. That is why I get joy watching the Little League World Series and seeing all the parents in the stands and that brings back memories for me. Baseball was the sport I knew I was going to keep playing. I wanted to play professionally, but didn’t know what it would take to get there, but I knew I wanted to keep playing.

Q: How did you get started in baseball?

Devereaux: I started when I was five years old and my older brother was seven. My father was athletic and liked sports and he was my manager. Baseball was my favorite sport to play growing up – it was summer time and the weather was nice. I got to meet new people because players on my team were not just from my school, but from schools across town. We got to travel some and play in tournaments in different states and even to nationals one year. I could not wait for the baseball season.

Q: Being a coach in Minor League Baseball you have the opportunity to work with and influence young athletes. Who would you say had the biggest influence on you as a student-athlete and why?

Devereaux: My father definitely was. He made us confident and stressed that we could do anything we worked hard for. He told us to set our goals high and to really go after it and reach those goals and to understand that we did have the ability to achieve those. That was not just with sports, but also with academics.

Q: With the millions of people being eligible for enshrinement in the National High School Hall of Fame, what does it mean to you to be part of such an exclusive membership?

Devereaux: That is probably one of my favorite achievements in life. I was driving across country, from Florida to Arizona, for spring training when I got the call. It was so, so unexpected and after reading up about it and seeing who had been inducted into the Hall of Fame, it puts me with an extraordinary group of people. I had the greatest time in Boston. I had no idea how much it influenced my life. To have that achievement is very much cherished.

Q: How do you think participating in high school athletics prepared you, not only for your college and professional careers, but for life in general?

Devereaux: I keep going back to academics and staying in school – academics were actually first. Some of my coaches were also my teachers so I interacted with them in the classroom and on the field or court. That is something that influenced me a lot. The coaches and teachers were mentors, but also friends.

Q: Did not playing high school baseball hinder you from getting drafted out of high school?

Devereaux: It never entered my mind. I always knew I was going to college. Sometimes I looked at it as an asset, because I could play all four sports during my high school years and not many people could do that.

Q: You were drafted in the 26th round of the 1984 free-agent draft by the Cleveland Indians, but did not sign. What led to the decision to not sign and return to Arizona State for your senior year?

Devereaux: I really valued my education. I knew I wanted to play baseball and I didn’t know how good I would be. I also looked at as being drafted in the 26th round, if I get drafted in the 30th round after my senior year it would not have been that big of a difference. The 26th round is pretty far down there and I figured I would finish school and continue playing college baseball and would not do any worse than the 26th round.

Q: What is a piece of advice you would like to pass on to today’s student-athletes?

Devereaux: Respect – respect your teachers, respect the game and also yourself.