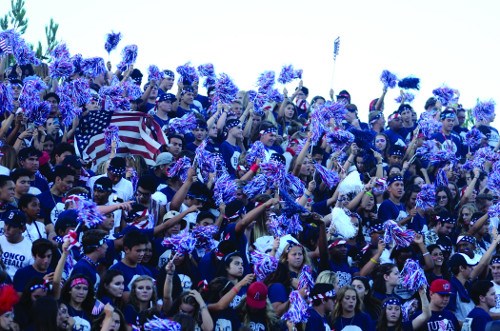 In August of 2014, Varsity Brands released a study that revealed a powerful link between school spirit, involvement, achievement and self-confidence. It found that students with higher levels of spirit perform better academically, are more engaged and involved, and feel more connected to their school and community. Put simply, #SpiritMatters!

This year in honor of National School Spirit Day, a day that celebrates school spirit across the country, Varsity Brands launched the official search for America’s Most Spirited High School. The contest called for each school to submit a 90-second video, a 500-word essay, two letters of recommendation and several photos demonstrating exceptional school spirit. Entries were received from 33 states.

Vista Murrieta’s submission included footage from games, pep rallies and student activities that epitomize a robust school spirit environment. In the classroom, on the playing field and in the community, the Vista Murrieta Broncos proudly live by a philosophy of CLASS: Character, Leadership, Attitude, Scholarship and Service.

With CLASS in mind, VMHS makes a conscious effort to ensure that every member of the community feels welcomed and accepted at school events. Each week, VMHS provides free transportation to the “Golden Broncos” – senior citizens in the area who love to cheer on their adopted team. Alongside the Golden Broncos sits the roaring student section, the “Bronco Bleacher Creatures.” More than 2,000 students wear their Bleacher Creature spirit shirts on game day, and their stadium-shaking, memory-making spirit has earned VMHS the local honor from the Press-Enterprise newspaper of “Best Friday Night Football Game.” 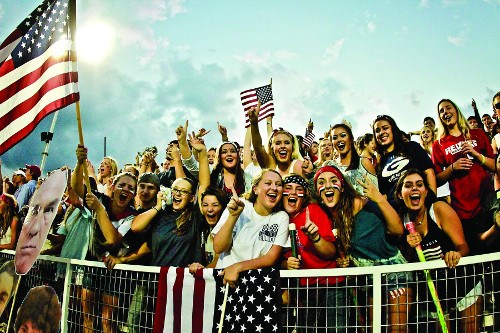 At Greenwood High School, school spirit runs as deep as the roots of the community. GHS felt its first surge of spirit in 1966, when the baseball team won the school’s first state title.

The community’s undying loyalty has numerous alums returning to Greenwood to raise their own Bulldog fans. Mary Ann Sandifer, class of 1978, writes, “I’ve been a Bulldog since 1968. I married my grade school sweetheart, the Greenwood High School quarterback. We raised two children in the school district and are proud to say we are all GHS graduates. To say our family bleeds Bulldog blue is an understatement.”

The school’s faculty echoes the passion of Greenwood’s alums. Principal Jerry Efurd writes, “Seeing the students rush the basketball court at the end of pep rallies, linking arms to sing our alma mater, then staying to dance along with the cheerleaders, dancers and football players keeps me coming back year after year as school principal.” 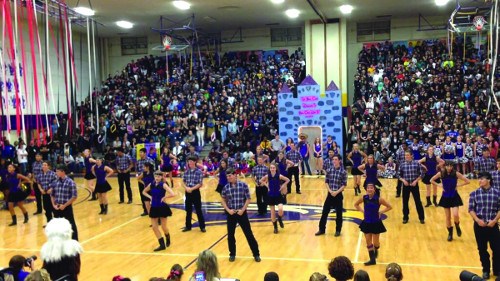 “Once an eagle, always an eagle.” That’s the motto of Richardson High School, where school history dates to the early 1900s. What was once a four-room school building now holds more than 2,600 students who live and breathe Eagle spirit.

Locals know Richardson for its Friday morning pep rallies. The rallies include elementary and junior high performances along with routines from the cheer team, color guard, marching band, drill team and “Desperados,” their country western dance team. The pep rally ritual is so popular that alumni, parents and community members frequently drop in to enjoy the festivities. Principal Charles Bruner writes, “It’s like having homecoming four or five times a year!”

There is also the historic homecoming parade that boasts more than 90 entries each year. Launched in the 1960s, it is the only remaining homecoming parade in Richardson. Kim Caston, president of the Board of Trustees, writes, “Richardson’s spirit is rooted in tradition and a culture of school and individual pride. It has stood the test of time.” 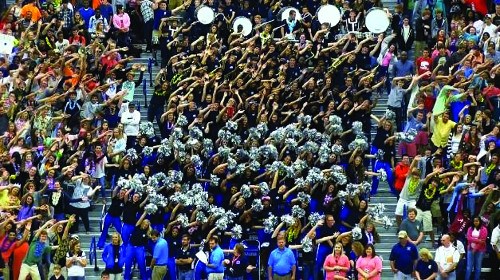 Enterprise High School’s past is marked by both tragedy and triumph. In March of 2007, a tornado destroyed EHS and Hillcrest Elementary School, taking the lives of eight students. Since then, Enterprise has become one of the most close-knit communities in the nation.

Dozens of student groups find unique and diverse ways to give back to the community. For example, the cheerleaders host an annual memorial golf tournament to honor two cheerleaders who lost their lives in the tornado. The student body also hosts an annual send-off for students competing in the Special Olympics.

Judi Lee Stinnett, class of 1965, writes, “I wish every community across America was like ours. But, regrettably, they are not. The difference is what makes us unique. We are Enterprise, where spirit matters!”

To watch all of the finalists’ videos and learn how your school can get involved in 2016, visit www.varsitybrands.com.