Enter a typical high school gym in America and you will be greeted by banners commemorating successful seasons in that school’s history. Some schools run out of room for all their state championship banners, while others hang a conference championship banner with pride.

Those banners would not be possible without tournaments conducted by state high school associations. The Oregon School Activities Association (OSAA) has already handed out several state championship banners this school year — championships earned by winning the state title.

For the third straight year, a select few Oregon schools will have to make room for a unique banner — one that a school can only win with the help of its closest competitors. 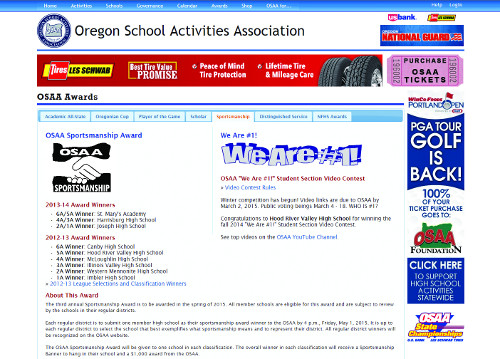 This May, the OSAA will announce its Sportsmanship Award winners for 2014-15. Winning schools receive $1,000 and, of course, a banner. However, schools can only be considered for the award if they are nominated by another school.

Each district is responsible for selecting a member high school that best exemplifies sportsmanship to represent the district in award consideration. Districts are free to use their own criteria, or follow the guidelines set by the OSAA submission form.

Schools are judged on exemplary behavior by their teams and their fans, number of nominations, referee and league feedback, and administrator ability to enforce the OSAA conduct rules.

Additionally, schools are penalized for bad behavior. If a coach is ejected from a contest, that school is automatically ineligible for sportsmanship award consideration. If an athlete is ejected, it does not automatically disqualify a school, but the committee will take it into consideration.

To ensure impartiality, any committee member with a conflict of interest recuses themselves from voting for a certain classification.

“Once you get athletic directors, coaches and students involved, sportsmanship starts to improve on its own,” she said.

“We really try to hammer home that good sportsmanship is rooting for your team – not against your opponent,” McGillivray said.

The award is traditionally given out to a winner from each of the state’s six classifications. However, last year, the OSAA grouped its classifications into pairs. Thus, only three champions were named: St. Mary’s Academy in 6A/5A, Harrisburg High School in 4A/3A and Joseph High School in 2A/1A.

In addition to the sportsmanship award, the OSAA also sponsors a seasonal student section contest. The “We Are #1!” contest is in its second year, and asks students to display their involvement, attendance, sportsmanship and school spirit.

Schools are asked to produce a 2-3-minute video that exhibits their student section’s sportsmanship and school pride. The videos are required to feature students, staff, coaches and other school personnel explaining why their student section deserves to be called the best in Oregon.

Once the March 2 submission deadline has passed, the OSAA staff determines five finalists. Those five videos are then posted to the OSAA’s official YouTube page for fans to determine the winner. The video that receives the most “likes” is the winner.

Voting begins March 4, and ends March 18. A winner will be announced shortly thereafter.

Not only does the award come with bragging rights, but the winning school also receives a banner commemorating the award. The winner also earns additional points for the OSAA Sportsmanship Award.