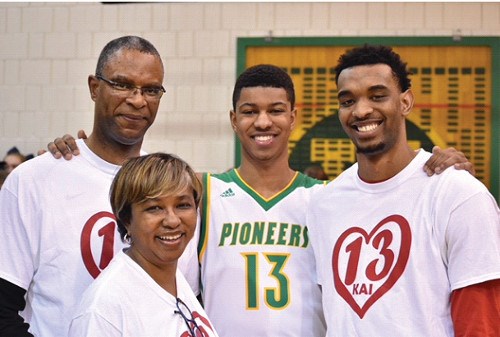 The game of basketball has put the Bates-Diop family squarely in the spotlight during the past few years. Such is the case when your sons are Big Ten Conference talent-level players in a basketball-crazed state like Illinois.

Richard and Wilma Bates oldest son, Keita, took the lead as a standout forward for the University High School (UHIGH) hoops squad in Normal, Illinois from 2011 to 2014. Keita was a three-time all-state player who led the Pioneers to a second-place finish in the Illinois High School Association (IHSA) Class 2A Boys Basketball State Finals in 2012, before ultimately accepting a scholarship to continue his career at Ohio State University.

Younger brother Kai’s stardom on the court was beginning to rise accordingly this past winter when the family’s hoops narrative shifted in a life-changing way. During a February practice, Kai suffered cardiac arrest during a drill, collapsing in the UHIGH gym during practice. UHIGH athletic trainers Maddie Biehl and Emily Martz acted swiftly; and after realizing Kai had no pulse, performed CPR and used an automated external defibrillator (AED) to resuscitate the 16-year-old sophomore while they waited for paramedics to arrive.

The community embraced Kai and his family in the aftermath of the harrowing experience, eventually diagnosed as hypertrophic cardiomyopathy, a disorder that causes the heart muscle to thicken.

“We are overwhelmed by the outpouring of support and love shown to our family during this time,” Wilma told the Bloomington Pantagraph in the days that followed. 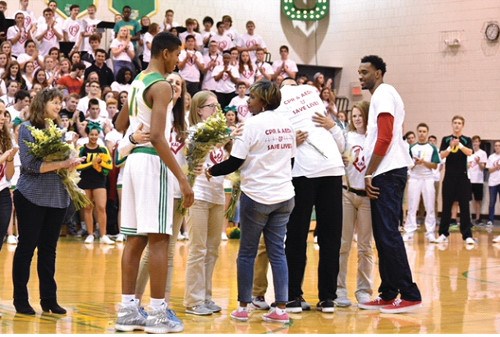 No one would have blamed the family if they chose to retreat while Kai focused on his recovery, but instead they chose to step back into the spotlight again, this time to help others.

During Kai’s hospitalization, they learned that Illinois law requires high schools to have an AED in the building, but because the state does not pay for the devices (most AEDs are around $2,000), many districts are unable to afford the units.

Working in conjunction with UHIGH, the family and school created T-shirts featuring the outline of a heart in red, and Kai’s name and number 13 within it. Using the proceeds from the $15 shirts, the family raised almost $13,000 to purchase AEDs for groups in the community.

As a result of the family’s efforts, four AEDs have been purchased thus far, including ones for the Bloomington-Normal PONY Baseball League, YMCA, JFL Football and LINC Center.

Fifteen days after suffering cardiac arrest, Kai was back on the court in uniform, as he opened the UHIGH contest against Pontiac High School with an uncontested basket, which the Pioneers reciprocated to the visitors on the other end of the floor. A capacity crowd decked out in Kai’s signature shirts roared for what was possibly the final basket of his high school career.

“I’ll definitely have this night to remember the rest of my life,” Kai said afterwards.

Kai is currently a junior at U-High, and will help with player development for the varsity basketball team this winter. He participated in workouts with teammates throughout the summer, helping them hone skills like ball-handling and shooting. In August, Kai and his family were honored for their efforts by the Illinois Heart and Lung Foundation.

“At some point, the ball stops bouncing for everybody,” Wilma Bates said. “It may be right now for Kai. But Kai is bigger than basketball. He continues to work out, and inspires those around him.”