The Illinois High School Association (IHSA) founded an innovative sportsmanship program in 2006 that has evolved into one of the largest and most extensive in the country at the high school level. Incorporating several different methods to encourage proper and respectful behavior amidst a competitive athletic environment, the “Do What’s Right!” sportsmanship program has set forth a model blueprint for member schools, student-athletes and fans to uphold.

“I feel that schools have placed an importance on their image since this program has launched. The more that schools want a better image – in regards to how they are perceived by those that come to see their teams play – is a great improvement,” Haines said.

Haines, who is the athletic director at Seneca (Illinois) High School, said, “the most enjoyable part of this is working with 21 outstanding young people that present their schools and their areas with ways of making interscholastic activities more enjoyable for the students and community members. I also enjoy attending the state finals events and rating the teams, fans and students of the competing schools.”

As an example, officials may offer such an award if they see a display of outstanding sportsmanship during a game in which they worked and athletic directors or principals have the ability to do the same. They can report the name of the individual and the details of his or her action to the IHSA on the IHSA website. Recipients are then notified via email of the award if the event is ultimately deemed an act of exemplary sportsmanship by the IHSA.

“Sportsmanship is usually only a topic of discussion when something bad happens,” said Sean Berry, a member of the IHSA Sportsmanship Advisory Committee. “I think our program is designed to recognize schools and students who do things the right way. I don’t think you can quantify how much impact it has had, but the purpose and the goal of the program certainly help raise awareness about demonstrating good sportsmanship.”

While the “Do What’s Right!” sportsmanship program did not come to fruition until 2006, the IHSA had begun taking interest in unique methods of making sportsmanship an encouraging topic of conversation more than a decade earlier.

In 1997, the IHSA introduced the first and only sportsmanship mascot in the nation. The Add A. Tude mascot has continued to appear at state finals competitions and began making appearances at IHSA member high schools upon request and ultimately became a fixture of IHSA competition and a familiar fan favorite character. 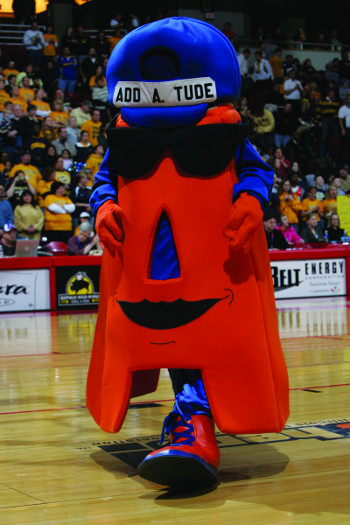 Berry holds that Add A. Tude “serves as a symbol to help raise the awareness the IHSA is trying to attain […] His presence at high profiled state finals competitions helps make our publicity efforts more efficient. Right now, awareness and participation are probably our two biggest priorities.”

Both Haines and Berry take great pride in the progress of the program over the years and value the importance of ensuring that sportsmanship is a high priority for all those affiliated with member schools.
“I take pride in this program,” Haines said. “I see school administrators take it upon themselves to address a poor sportsmanship issue during a game – or even better – see administrators go over and shake the hand or high-five a young person for showing proper sportsmanship. A major part of our job is modeling just what we are trying to show our fans. Basically, our overarching goal has always been trying to make sure that all the schools in the state are talking about sportsmanship. We just want it to be part of the conversation.”

“I think it is a point of pride and I truly believe we are making a difference,” Berry said. “Our goal now is to increase the impact we can make. No matter what we do, there will always be problems to some extent, but if we can raise awareness and reward good sportsmanship, I think we can continue making a positive impact.”

Matt Costakis was a 2014 summer intern in the NFHS Publications/Communications Department. He is a junior at DePauw (Indiana) University studying communications and English writing.